From Brading Down you have a fantastic view of the River Yar floodplain. Humans have lived here for at least five thousand years.  We know this because we have found Mesolithic and Neolithic axe heads.  It was a good place to live because the river fertilised the soil and the cliffs behind protected the area from cold north winds.  The soil was well-drained so good for growing wheat and oats.   The downs would also have supported herds of sheep, so people living here had a varied diet.

The Car Park and the Down are part of an ancient field system that is prehistoric or Roman. This is why Brading Down is a Scheduled Monument.  These fields go about 800m along the length of Brading Down. They were man-made terraces that stepped down the side of the hill.  Each level was separated by soil banks or lynchets that were about 2m high and 2m wide.  They are less easy to see than they used to be. 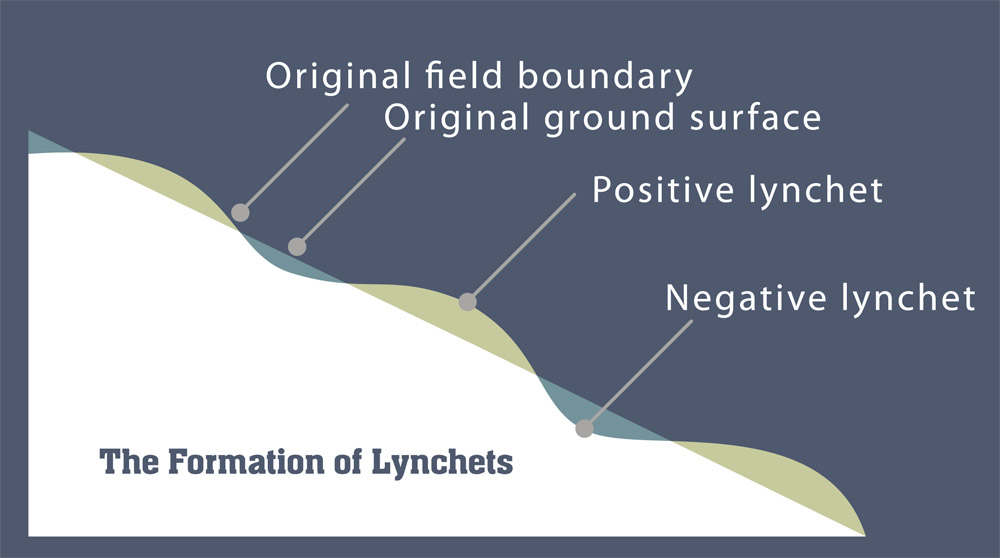 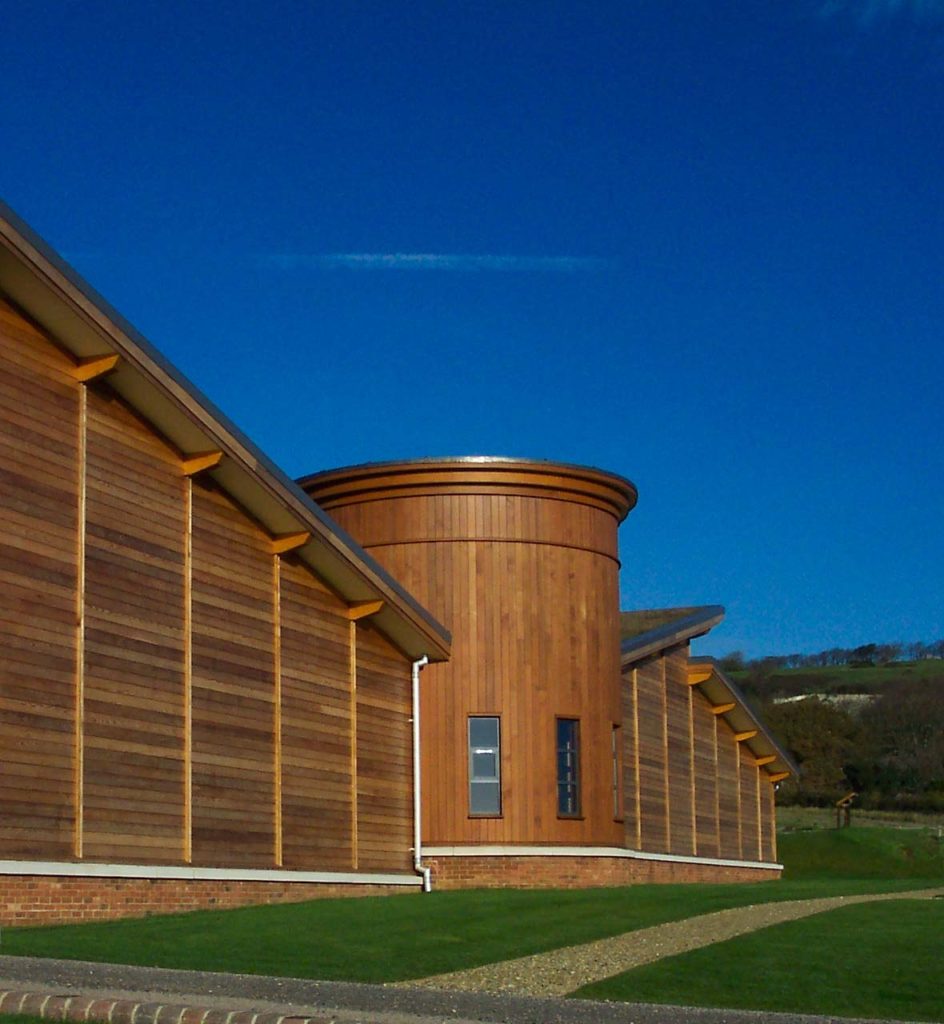 Looking down from the main car park at Barding Down you can see the semi-circular grass roof of Brading Roman Villa.  It is a Romano-British Courtyard Villa and is also a Scheduled Monument.  The first villa was built very soon after the Roman conquest in 43AD.  It is has some of the best mosaics in Roman Britain and a beautiful café.  It’s a 20 minute downhill walk from the viewpoint car parks.

Pottery that have been found that tells us that the site was permanently occupied from at least 50BC. We do not know the exact shape of the buildings from this period.  A line of posts under what is now the car park suggest that there were some buildings at this time, but wooden buildings would not have left much evidence.  However geophysical survey has revealed three ring ditches or barrows.  Barrows were where they buried their dead, so we know people must have lived here.  Farming tools from this period have also been found.

Before the Roman invasion the area exported glass, jewellery and stone.  The sailors would have stopped at Brading for water.

Around 43AD the buildings were typical Iron Age round huts.  The people were in contact with Rome but had not adopted their housing.  There is no evidence of a defensive wall or weapons at the site in this period.  This suggests that the Romans were welcomed.  From this time both local and international items have been found.   Therefore people would have the experience of luxuries from Rome; olive oil, wine and Samian pottery from Gaul.  In return the people living on the site would be selling: corn, leather, bone hair pins, slaves, hunting dogs, meat, Vectis ware (made from the local blue slipper clay, to which was added sand and sea shells to make it better for pots), beer and stone.

In the early second century the South Range was an aisled hall clearly influenced by Rome.  The eastern end of the hall was open as a large room – its size suggests about 100 people could have gathered in it.  The west end of the building was divided into smaller rooms to give privacy for the owner and his family.    There was a bathhouse near the South Range.

In the late part pf the Second Century it appears that the South Range was pulled down and the materials used to build the North Range that was larger than the earlier one.  The functions of the building continued as before.   The earliest corn drying pit was found in the North range.  This range had a hypocaust it is well-preserved: stacks of tiles to support the raised floor, flue boxes going up the walls to act like radiators and the fire arch for the furnace that would have provided the heat.  There would probably have been 8 rooms in total in the North Range.  The private rooms would have been at the sides of the building

In the Fourth Century the Aisled hall continued to have the main functions but the rooms that had been used by the owner may have been given over to the man who had responsibility for the day to day running of the villa.  This would have kept the manager in contact with the workers who would have slept at the sides of the hall.  The West Range was added for the owner of the villa, who therefore stopped living with his workers.  The West Range is evidence of wealth and continual security from attack.  To the east of this new building there was a garden, this indicates the wealth of the owners and that they had time for leisure.  A new bath house was added.  The West Range was not a farm but a status symbol.  It was the last to be build and is evidence of the increasing prosperity of the people who lived here.

The main road between Brading and Sandown crosses Morton Marsh.  This is area of flat land just above sea level.  Today in winter, it is often flooded because it is so near to sea level.  In Roman times it was all sea and Bembridge was an island.  You can see where the sea would have been on the map 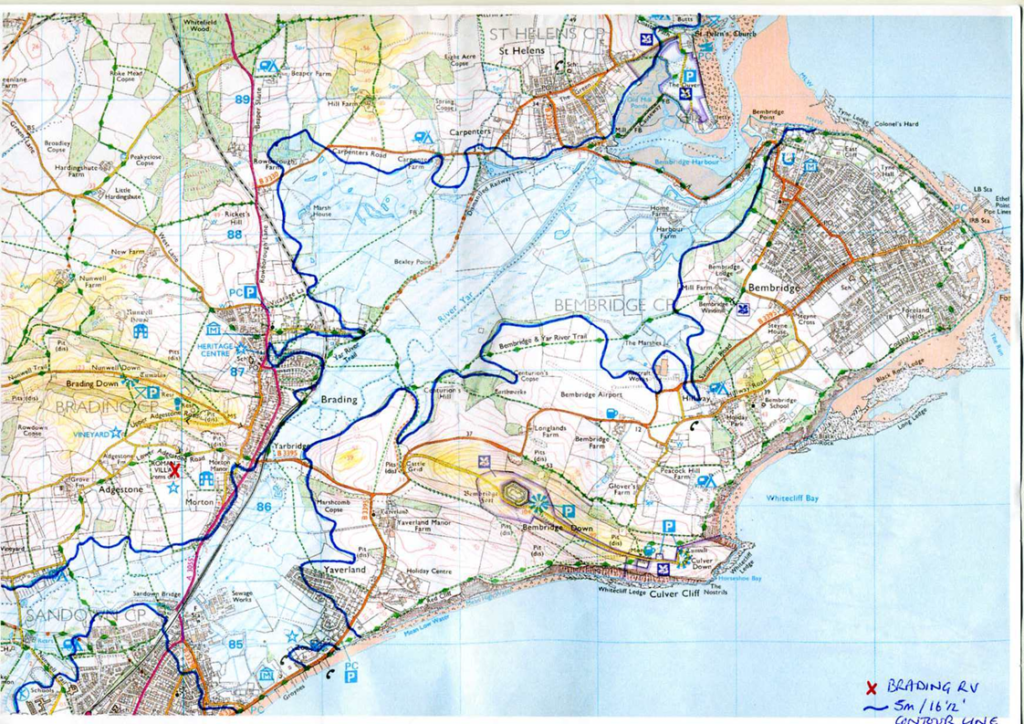