The reserve covers 15.3 ha of tall fen and open water habitat, with broad-leaved woodland and scrub on the upper reaches of the Western Yar. It also lies within the Isle of Wight Area of Outstanding Natural Beauty. The site is on the old flood plain of the river, and was once grazing marsh. The River Yar flows northward from Freshwater Bay to Yarmouth, reaching the sea at a sluice gate on the Causeway. This closes at high tide causing the water to back up to the rustic bridge. Weirs further upstream prevent water levels rising in the south marsh.

When can I visit? 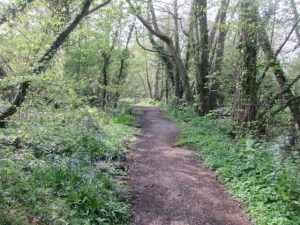 the public at all times. There is also a permissive path running through the north marsh between Blackbridge Road to Afton Road, but this area is liable to flooding in wet weather and may be closed for safety reasons.

There are several types of wetland habitat on the site providing a home for a variety of plants and animals. It is part of the Freshwater Marshes SSSI. Tall fen with common reed covers relatively large areas on deep, wet peat. In the wetter areas of the south marsh there is a varied flora with yellow loosestrife, marsh fern, marsh cinquefoil, greater bird’s-foot trefoil and marsh woundwort. Southern marsh orchid is found in wetter areas under recently cut scrub. In the drier areas, there is greater pond sedge together with meadowsweet, hemp agrimony, hemlock water dropwort, water mint, great willowherb and yellow flag. 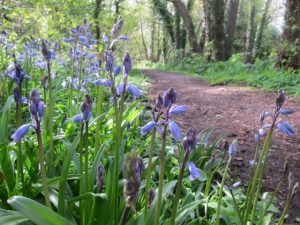 The river and the large pond in the north marsh have areas of open water. The river is shaded along most of its length. In the open areas of the south marsh, bur-reed dominates the open water with fool’s watercress. The pond has been colonised by soft rush, toad rush, remote sedge and clumps of grey club rush. Breeding birds include mallard and moorhen. The dragonflies include southern hawker, emperor, broad-bodied chaser and common darter, and the damselflies include the large red, blue-tailed, common blue, and azure damselflies.

Alder woodland occurs on the south edge of the reserve, and has oak associated with the drier areas. The ground flora varies from mosses and liverworts, through greater tussock sedge and broad- leaved buckler fern to water mint, yellow flag and meadowsweet. Lesser water parsnip and marsh fern are also found here. 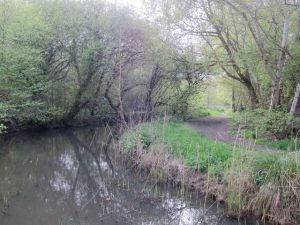 woodland forms a thin strip along the eastern river bank of the north marsh of the reserve. There is a dense scrub layer of hawthorn, hazel, and sallow. Osier woodland occurs on wet peaty soils to the north of Blackbridge Road. Silver birch woodland occurs in the north marsh on dry sandy soils, forming a screen around the pond. Birds seen and heard in the wooded areas include cuckoo, song thrush, blackcap, whitethroat, chiffchaff, long-tailed tit and green woodpecker.

Our friend Colin Pope from the Isle of Wight Natural History and Archaeological Society has written a wonderful paper on the history of Freshwater marshes. Its well worth a read.

The site is at the end of the Yarmouth to Freshwater bay cycle track following the old railway. There is currently no throughway for cyclists on the reserve. Access to the North Marsh is from Afton Road, close to Co-op.

Access to the South Marsh is from Coastguard Lane, or both marshes can be accessed from Blackbridge Road.

On foot/By bike – The site is at the end of the Yarmouth to Freshwater bay cycle track following the old railway. note, there is no throughway for cyclists on the reserve.

By bus – Public Transport offers good access to the South Marsh with a seasonal bus stop along Afton Road for the Southern Vectis Needles Breezer, or year-round Freshwater Bay Route 12. For the North Marsh Route 7 and 12 ‘Co-op’ bus stop (note this Co-op has moved), or FYT Bus stops outside new Co-op building and is two minutes from entrance to reserve. (Bus Timetables)

The site is mostly marsh and can be hard going when the ground is wet. There is open unfenced water. There are steps at the southern end leading towards Freshwater Bay, and a narrow bridge with steps just north of Blackbridge Road. Most of the ground is fairly level.

The site is managed as a marsh, and so it is sometimes pretty wet. the animals and plants that live here depend on the water level being high at times. Dense willow scrub has invaded much of the reserve and an on-going management programme seeks to contain its spread and to open up some areas that have become heavily shaded to encourage reed and other more demanding wetland species.