A big area of meadow and woodland on the southern edge of Ryde, adjoining the Monktonmead Brook. The meadows at Pig Leg Lane have sat within the Island’s agricultural landscape for over 4000 years and the archaeological evidence of its long history still survives today. This beautiful unspoilt area is one of the few areas in Ryde where we can enjoy the countryside as it might have looked in years gone by. 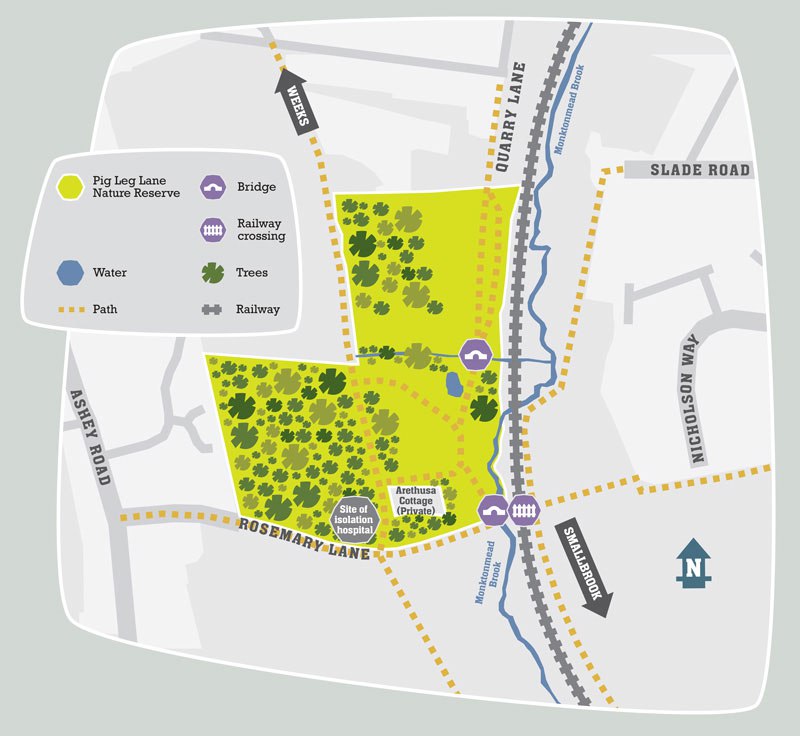 We love Pig Leg Lane but for a long time it was in need of attention. 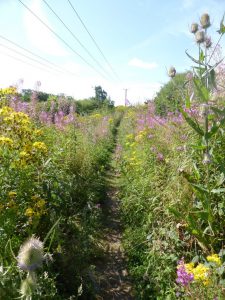 With help from the community and some generous funders we have done a lot of work to make this lovely site into a place that is easy for everyone to get to and enjoy. Thanks to funding from the People’s Postcode Trust, Ryde Town Council, and Down To The Coast we had in 2016 a big 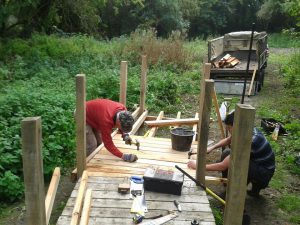 programme of improving paths and managing scrub. In 2017 with support from Tesco Bags of Help we installed a boardwalk alongside Monktonmead Brook, and worked with the Environment Agency and Isle of Wight Council to stop water cascading down Rosemary Lane and into the watercourse.

Ryde Town Council have donated a couple of benches which we will be renovating and installing. We have had a huge amount of support from the Isle of Wight Green Gym who have done great work helping with the paths and the pond.

Arethusa Cottage is a private house on the edge of Pig Leg Lane. It is an unusual name for a house that commemorates a very celebrated occupant. Read his story here. 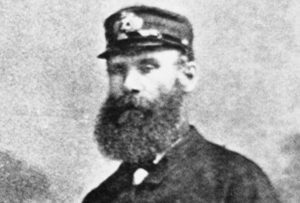 The Notification of Infectious Diseases Act was passed in 1889 and in 1893 the Isolation Hospital Act. Both hospitals and local authorities had for a long time recognised the need for wards or separate institutions for infectious diseases and these had been provided both at Newport Infirmary and Ryde Hospital and a separate nursing staff had been appointed for these wards.

Smallpox was a serious disease that used to kill many people. Because it was so infectious, patients were taken away to a special hospital for treatment. In Ryde, the Smallpox Hospital was in Weeks, but as the town grew, it was decided to build a hospital further away. In 1885 Ryde Borough Council purchased land for an Isolation Hospital, about one acre off Rosemary Lane and there the new hospital was set up on a brick foundation. An additional strip of land was leased in 1911. The hospital came to have two buildings, the wooden one with two four-bedded wards and later a brick building for an ambulance and for disinfection equipment.

Ryde Isolation Hospital dealt with cases of scarlet fever, measles, and typhus as well as smallpox. Patients from Cowes and Newport were treated here as well, after a serious smallpox outbreak in 1919. The hospital was closed in 1934 and demolished, but you can still see garden plants and trees in the area where it once stood.

Based on A History of the Isle Of Wight Hospitals by E. F. Laidlaw

On foot/By bike – Quarry Lane provides the main access into the site from the north. To the south Rosemary Lane links the site to Ashey Road and via a pedestrian crossing across the railway to Oakfield.

By Car – On-street parking in Quarry Road, or the closest car park is at Ryde St John’s Station, postcode for satnav PO33 2BA.

The site is bordered to the east by Monkton Mead Brook and the Ryde-Shanklin railway line. The site is dissected by Weeks Road and bordered to the south by Rosemary Lane. Both of these are very old rights of way. The site is also crossed by two public right of way (R53 and R103) and by an overhead electric way-leave.

Paths through the site are mainly laid to grass. In wet weather parts of this site are muddy. However, we had the site ‘road-tested’ by a kind lady in a mobility scooter and we are pleased to say it passed with flying colours!

On all G2N sites including this one, the surfaces are in keeping with a countryside location. This means that they are made of compacted gravel, hard surface, and in some areas will be unmade. All visitors should take the normal care that they would in any open countryside environment as hazards and natural features that affect accessibility will at times be present.

Much of the open areas of the meadow are accessible with care by most people on foot and the stream can be crossed by people with mobility scooters or buggies. We have, and continue to work to improve year round access, as some paths can be slippery in winter. Care particularly needs to be taken on the area bordering Monkton Mead Brook which is prone to flooding. In wet weather access for wheeled users will not always be possible throughout the site, so you will need to be aware of the conditions.

Public Transport Access is good. The site can be accessed at the north through Quarry Road. Access by bus or train from St John Station, Buses 2, 3 and 8. There is a five minute flat walk along Quarry Road, followed by a short walk along R103 footpath. There is gate here.

The site is also accessed from the north via Weeks Road which is a public Right of Way (R110).

The site access from the south east is from Rosemary Lane accessed off Ashey Road. The nearest bus stops are ‘Swanmore Middle School’ or ‘Ashey Road Stores’ both served by Bus No 37. From here a flat five minute walk to Rosemary Lane. Much of Rosemary Lane is unmade and in a poor state.

The site is accessed from the south west from Oakfield, via a walk from Slade Road. This path crosses the railway line and users should take care and be aware of approaching trains.

There are no gates or stiles once on site and there are several seats.

We will be updating our Site Access Statements during 2022. Please watch this space.

This meadow is typical of many grassy areas that used to be common in the northern parts of the Isle of Wight, but which are now less easy to find. Look out for grassland and woodland animals and plants, birds such as woodpeckers, blue tits, jays and chaffinches are often to be seen and heard. 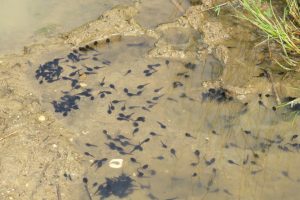 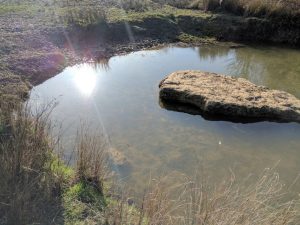 Keep an eye on the pond and the Monktonmead Brook to see some freshwater wildlife – frogs and newts are known to use the pond!

The Isle of Wight Natural History and Archaeological Society have surveyed the site for us this summer and produced this wonderful list  for entomology and another list for botany.

What’s in a name?

Pig Leg Lane has had various names – most recently Swanmore Meadows. We found that local people were keen to let us know what they called it and we have had varying suggestions including ‘Rosemary Common’. There used to be pig sties nearby and ‘Piggy Lane’, ‘Pig Leg Lane’ and ‘Iggy Piggy Lane’ were all been suggested. In 2016 we set up an online survey, and the winning name was Pig Leg Lane – so that’s what the site is now called! We also discovered that the pedestrian railway crossing is called Pig Leg Crossing, which gives more support to this being an old local name for these lovely fields.

The open meadow areas require autumn cutting to prevent re-growth and we sometimes remove the cut material from the meadows. Although scrub is an important wildlife habitat we need to prevent it from encroaching on the grassland. The riverside vegetation also has an annual cut on a rotational basis.

A lot of work is needed to make Pig Leg Lane easy to use, and to keep it in good condition for wildlife.

A grant from Ryde Town Council in 2016 enabled us to improve access to the site from Quarry Road.

Works at Pig Leg Lane in 2016 were supported by players of People’s Postcode Lottery, awarding funds from Postcode Local Trust. In 2016-17 we were supported by Tesco Bags of Help to improve access and scrub management. We also received funding from Down To The Coast Landscape Partnership to engage with local people.