The character of Brading Down

As far as we can tell, virtually all the areas of grassland existing in Britain were once a forest. These would have been cleared many centuries ago and Brading Down has been used for agriculture for many centuries. 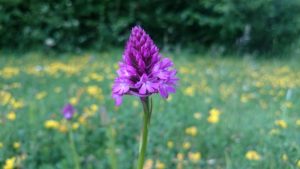 Brading Down is chalk and has shallow soil. Its steep south-facing slopes are warmed by the sun and dry quickly. These conditions are ideal for downland specialist plants, mainly perennials. There are more types of plant than in other habitats – up to 40 in every square metre – because no one plant gets the chance to dominate. In summer look out for the bright yellow-flowers of St John’s wort, the purple spikes of pyramidal orchids and smaller plants like eyebright and harebell.

The appearance of Brading Down is due to centuries of grazing by sheep and cattle. Low-density grazing continues today and stops more aggressive plants dominating.  It is good to have some trees, because they provide shelter for all sorts of wildlife.

Brading Down is capped by chalk. This consists of the remains of millions of small sea creatures, dating from when it was under the sea. The chalk lies atop Upper Greensand, Gault Clay and Lower Greensand, the bottom layer dating from about 70 million years ago. Chalk has been extracted from the Down for many years – a 19th century tourist guide book warns the traveller making his way from Brading railway station to inspect the remains of the Roman villa that he would have to pass ‘a glaring chalk quarry’ on his way.

At this time there was a growing demand for chalk. It was applied to fields, but could also be burned into good quality lime. The Isle of Wight Cement Company was established at Brading in 1884, and the Isle of Wight Railway built a spur linking Bembridge with the works at Brading. However, it was closed by 1905. 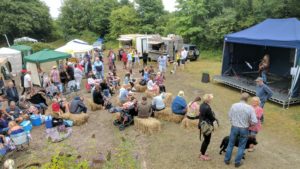 There are five chalk pits on Brading Down. One is used by the Butterfly Walk another is Little Jane’s Pit but the largest is Bulley’s Pit.  It has recently been restored by Gift to Nature and is used for fairs and outdoor theatre. 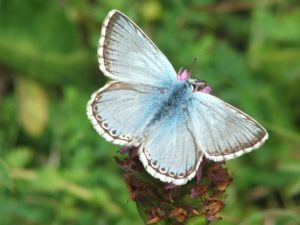 There is lots of horseshoe vetch on the Down and this is the main food of the rare chalkhill blue butterfly.  You can see them in large numbers on Brading Down during late July and August.  Only the males are a pale silvery blue, the females are dull brown. You can also look out for the striking six-spot red burnet moth feeding on birds-foot trefoil in the summer.  At the base of the Down, in one of the abandoned chalkpits, there is the Butterfly Walk.  It was created to encourage butterflies, so it has flowers producing nectar for them to eat and places to bask in the sun.

Kestrels can be often seen hovering over the reserve.  They are on the look-out for small mammals and birds. Their favourite food are voles and they eat up to eight a day.  You will also see buzzards, which are larger than kestrels.  They are often in pairs and circling on the currents of air.