Bonchurch landslip is a large area of woods and jumbled paths between Luccombe and Bonchurch villages. It features some remarkable landforms, cliffs, boulders and steep steps, and is one of the most extraordinary landscapes on the Island which has been delighting and intriguing visitors for over 200 years.

The coastal path runs through the reserve, and walkers can climb up the inner cliff through the bizarre and claustrophobic climbs of The Devil’s Chimney or The Chink.

The landslip has an established woodland of ash, oak and beech, with unusual lichen species. The lower slips, comprising mixed clay and sandy habitats, once supported a complex mix of acid-loving and chalk-loving plant species, but much of this has fallen into the sea, and the lower area is almost impossible to get to because of the continued land movement. 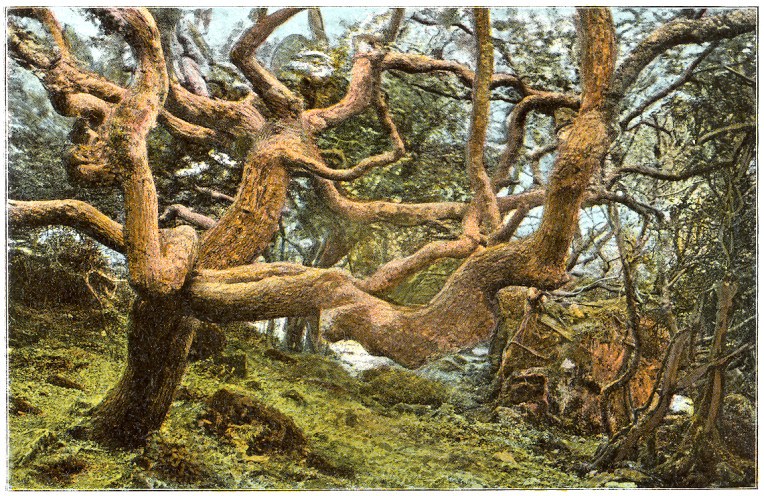 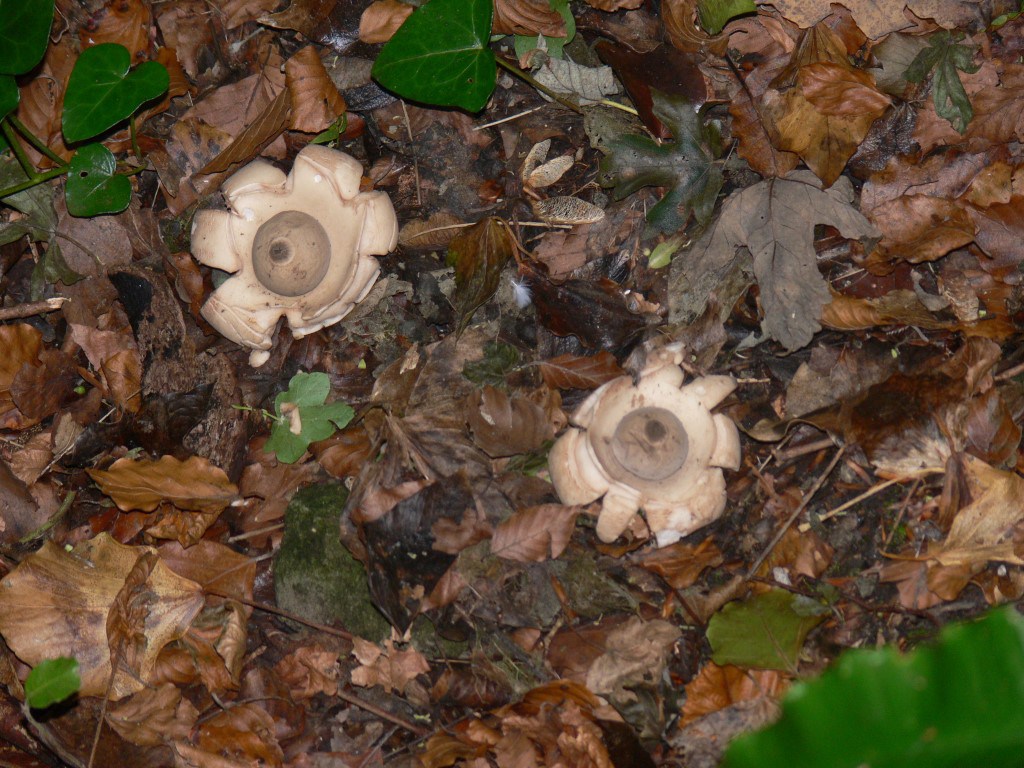 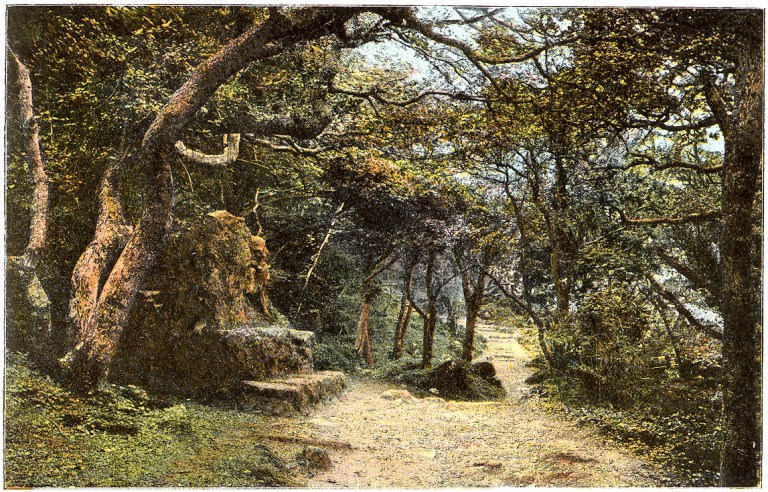 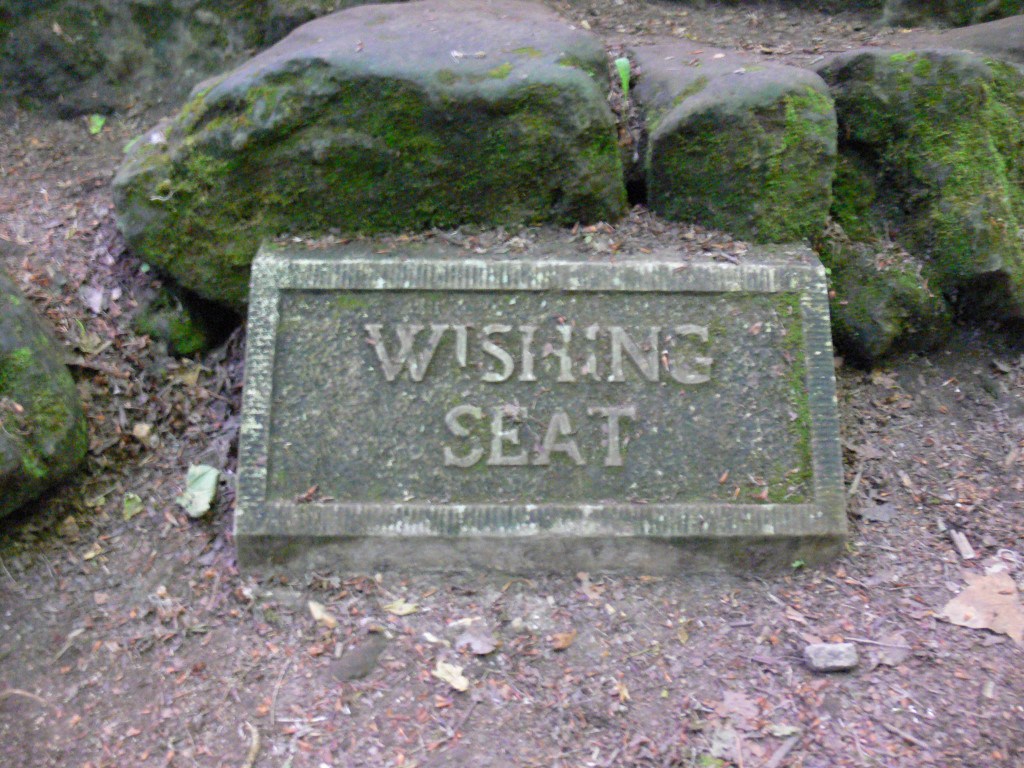 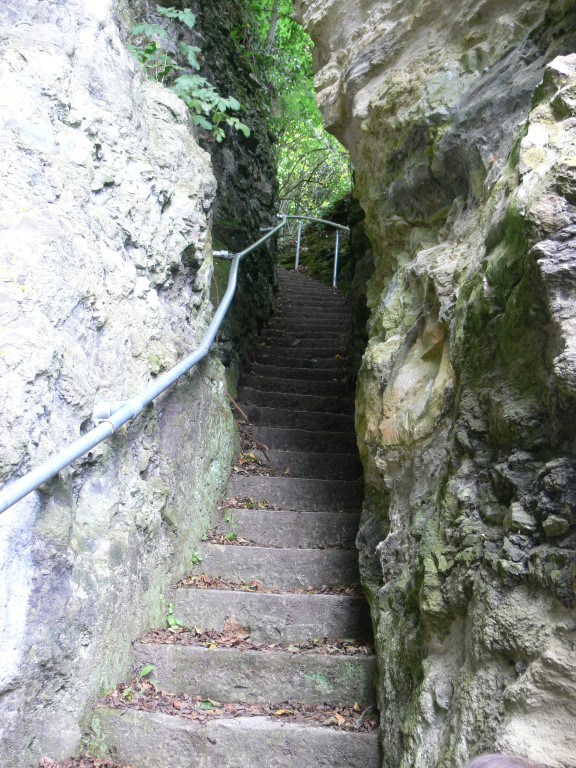 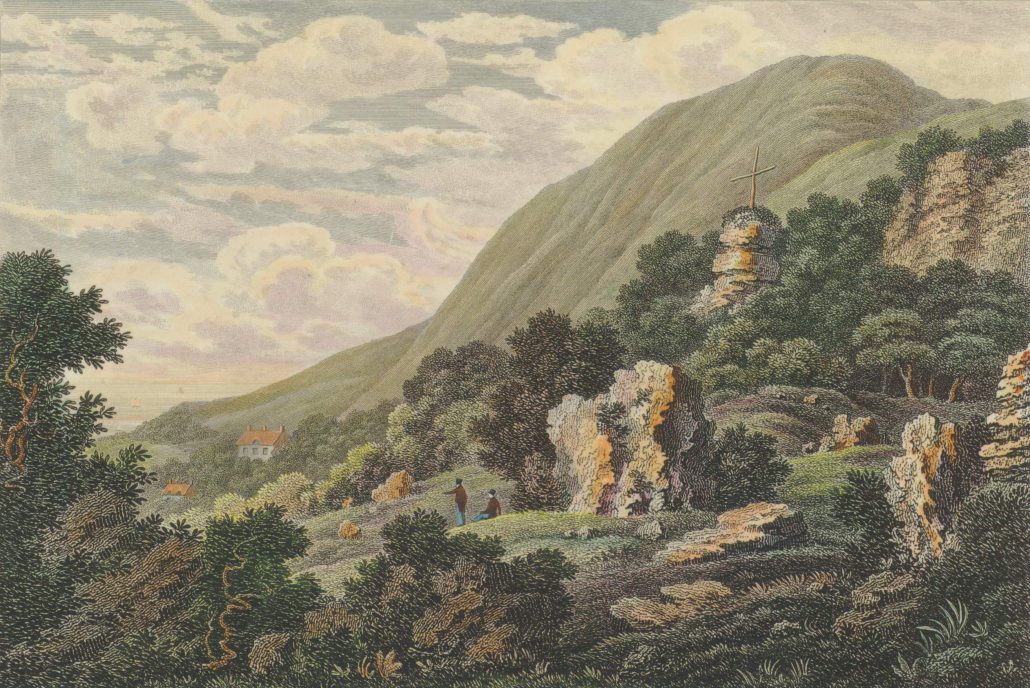 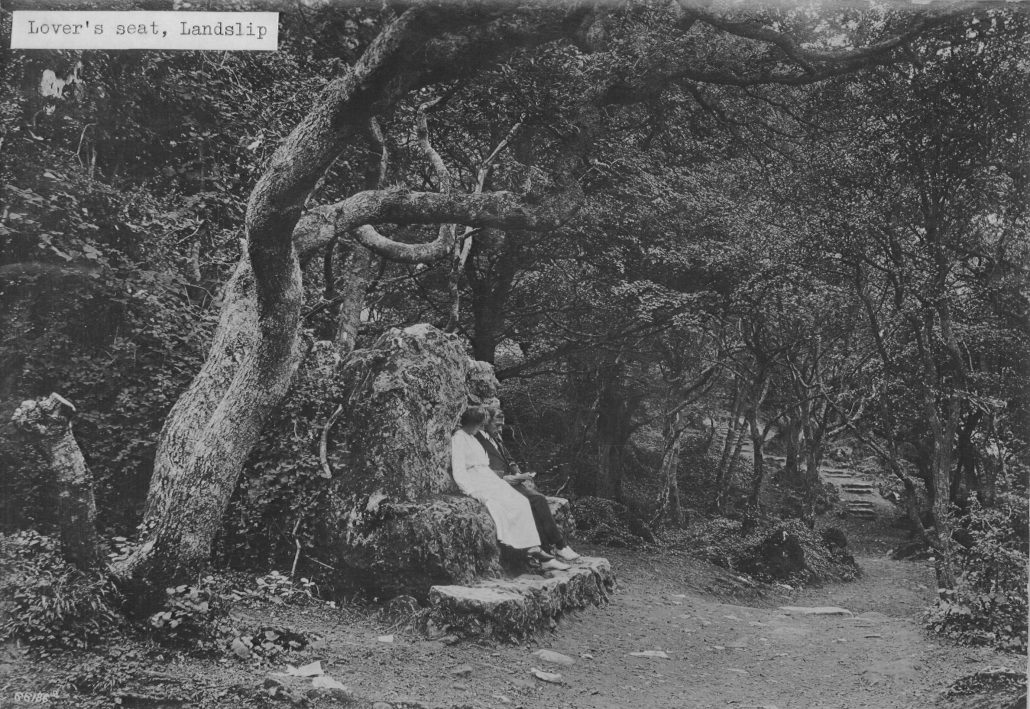 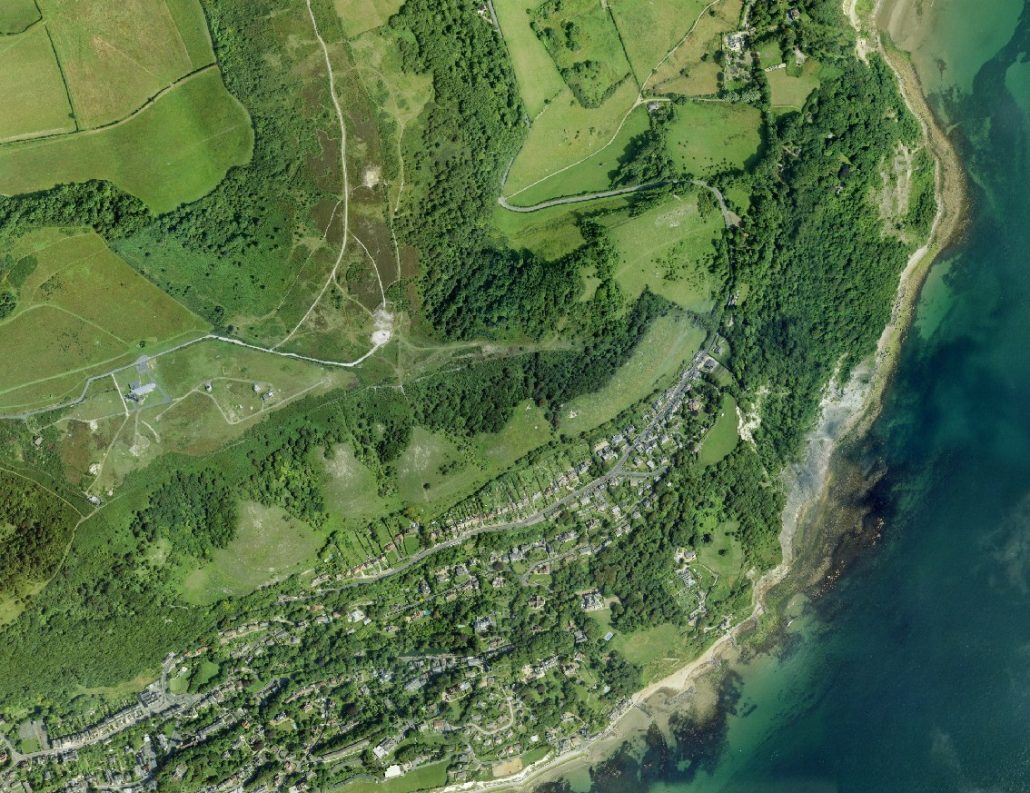 The Landslip has existed in some form for thousands of years, but land movement events have changed it many times in the past, and continue to do so. Its present terrain derives largely from major landslide events in 1810 and 1818.

Although Bonchurch village itself is on a stable part of the Undercliff, slippage is still active at its edge adjacent to The Bonchurch Landslip. An 1811 account by Thomas Webster described the scene:

I was surprised at the scene of devastation, which seemed to have been occasioned by some convulsion of nature. A considerable portion of the cliff had fallen down, strewing the whole of the ground between it and the sea with its ruins ; huge masses of solid rock started up amidst heaps of smaller fragments, whilst immense quantities of loose marl, mixed with stones, and even the soil above with the wheat still growing on it, filled up the spaces between, and formed hills of rubbish which are scarcely accessible. Nothing had resisted the force of the falling rocks. Trees were levelled with the ground ; and many lay half buried in the ruins. The streams were choked up, and pools of water were formed in many places. Whatever road or path formerly existed through this place had been effaced ; and with some difficulty I passed over this avalanche which extended many hundred yards.

(From: Sir Henry Englefield (1816). A Description of the principal picturesque beauties, antiquities and geological phenomena of the Isle of Wight. London: Payne & Foss. p61.)

The Landslip between Bonchurch and Shanklin belonged to Bonchurch Farm and was called ‘East End’ on a 1729 map of Bonchurch. At this time it was mostly not a wooded area as it now appears. The area is shown as rough grazing land rather than woodland on the OS 1793 map although the SSSI designation for the Landslip refers to ashwoods that ‘appear largely to be primary’ and states that there are many very old examples of oak and beech as well as ash. This suggests that even if the woods were not very old, some of the individual trees there have been there for many hundreds of years. Tree cover within the Landslip is not shown until the OS 25″ 1862 map. (See more in the Undercliff HEAP).

The Bonchurch Landslip was developed as a picturesque woodland walk in Victorian times, with natural features many of which still can be seen today including the Devil’s Chimney, the Chink, and the Wishing Seat or Wishing Stone, a large moss-covered rock by the path. Tradition has it that if you sit on the Wishing Seat, and make a wish, it will come true.

On foot/By bike – Footpaths V65a and V65b is the coastal path that runs through the site. Linking this to the main road and the car park is V65, V65c and V65d. Cycle access is via the main A3055 road. You seriously will not want to ride a bike on this site, but you can park at the top and walk down. There are no cycle racks at present, but there is plenty to attach your bike to.

By Car – There is a council car park (Smugglers Haven) opposite the site entrance, parking is chargeable and contributes to the running of Nansen Hill and Bonchurch Landslip.  Approx site postcode for satnav PO38 1QD

This site is extremely steep, with many steps, uneven ground and rough going. Stout footwear is recommended. In wet weather the rock steps are very slippery, and there are high unfenced drops. This site is not suitable for any access except on foot, and you need to be reasonably physically fit. The nearest public toilets are in the town of Ventnor. In opening hours you may wish to visit Smugglers Haven Tea Room for refreshments and facilities. This is very close but not open all year around.

This is a very steep site and the land is slipping. This stresses the trees and makes them prone to disease. Therefore we occasionally need to take down a tree. Its not very easy to extract the trees, so we will leave on site to create dead wood habitats piles.