Nansen Hill is at the eastern end of the Ventnor Downs, between Bonchurch and Luccombe. It is on the west side of the A3055 Shanklin to Ventnor road.

The reserve is a very steep grassy slope with spectacular views out over the English Channel and Sandown Bay. It is nationally protected for the great populations of chalk grassland flowers and insects that are found there, especially orchids and butterflies.

In 2018 thanks to the funds from the Heritage Lottery from Down to the Coast we made some long-awaited improvements to Nansen Hill that will not only make it safer and easier to get onto the site, but also help cattle to graze it in future, which will be great for the wild flowers and butterflies that depend on the delicate chalk grassland.

The aim of this project was to improve the condition of the nature reserve, which is nationally designated for the remarkable chalk downland flowers and plants that live there. Over the years the hill had started to get covered with bushes, and the flowers were not getting enough light.  The best way to sort this is through grazing. In order to graze the hill it was necessary to repair the fencing and replace the pedestrian gate, to allow cattle to get on the site safely – and not escape through the old fence! With lots of help from the Isle of Wight Green Gym we cut back much of the encroaching scrub bushes at the top of the hill, and with the grant money we rebuilt the fences and gateway to make it safer for walkers – and cattle – to use.

Nansen Hill as a place for recreation goes back to 31st December 1932. Mr John Howard Whitehouse, the Warden of Bembridge School, conveyed the central part of the hill to four distinguished men – the Prime Minister of Britain (Ramsey McDonald), the Prime Minister of Norway, the Rector of Oslo University and a Mr Neil Rocke from London. 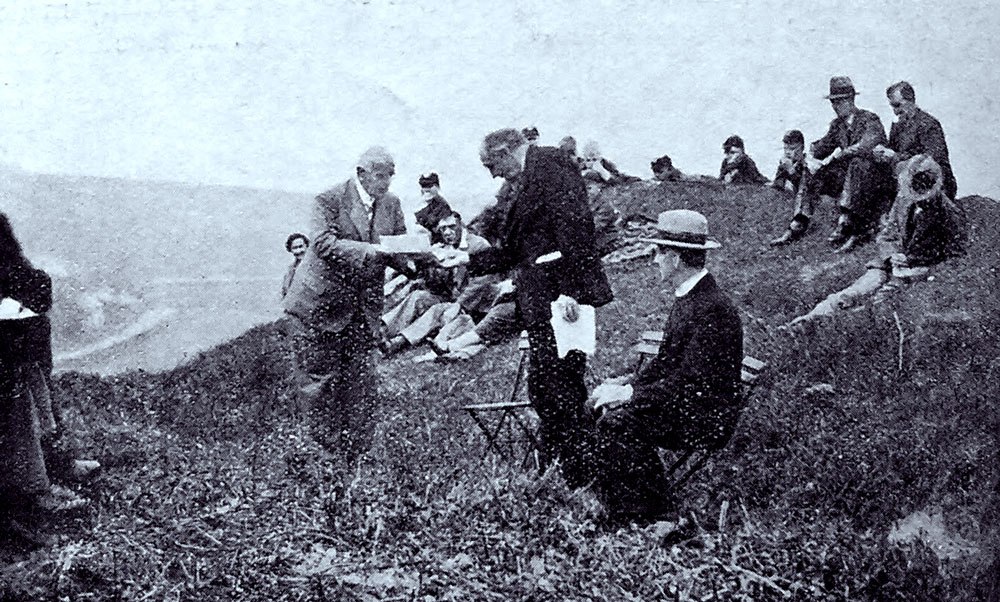 The moment Mr Whitehouse handed over the deeds of Nansen Hill to Lord Cecil on 31 December 1932. The present-day road to Cowlease is visible in the background.

A trust was established enabling the land (held by these persons as trustees) to be used for “the result of recreation of adults, children and in particular the youth of England and Norway” in memory of Dr Fridtjof Nansen who had promoted “peace and friendship” between the nations.”

Later, in 1963, the land adjacent to the road was added when it was conveyed to the County Council by the Education Trust Ltd. It is now managed by Gift to Nature and anyone is welcome to visit the site, particularly the youth of England and Norway!

On foot/By bike – Footpaths V109 and V123 cross the site and link it to the adjoining Bonchurch Down. Cycle access is via the main A3055 road.

By Car – There is a council car park (Smuggler’s Haven) opposite the site entrance.  Approx site postcode for satnav PO38 1QD

Grass paths cross the site which, as the name suggests, is steeply sloping.

The site has chalk grassland, with the richest areas botanically being the middle and upper parts of the slope where the turf is shorter.

There is a good population of autumn gentian in most years at the top of the slope. Devil’s-bit scabious is also found towards the north of this area. On the terracettes on the north-facing slope at the top, there is a population of common spotted orchids. It is part of the Ventnor Downs Site of Special Scientific Interest.