In 1299 there is a reference to “Gauldane”  in the Royal Survey derived from ‘gafol (payment, tax) and ‘dun’ (hill, hill country). In 1608, “Gaudon Common” is mentioned in the Royal Survey and referring to common land for sheep,  collecting timber    and with a brick works.

When the land was purchased in the early 1860’s for military use it was ‘poor downland and rough gorse’. The land surrounding the fort was cleared to allow “uninterrupted and free field of fire for some distance”. So much of the trees that you see today have grown up since after the Second World War.

The site was occupied by the military between 1863 and 1960. With the military leaving Golden Hill, the local government on the Island showed that they were interested in the site itself. In 1962 the Isle of Wight County Council had been asked to designate part of Golden Hill Fort for industrial activities and a request was made for the southern area to be scheduled as a public open space and in 1963 the IW County Planning Committee recommended that the vacant land to south of the Fort be included in Area of Outstanding Natural Beauty (AONB) order for public recreation. 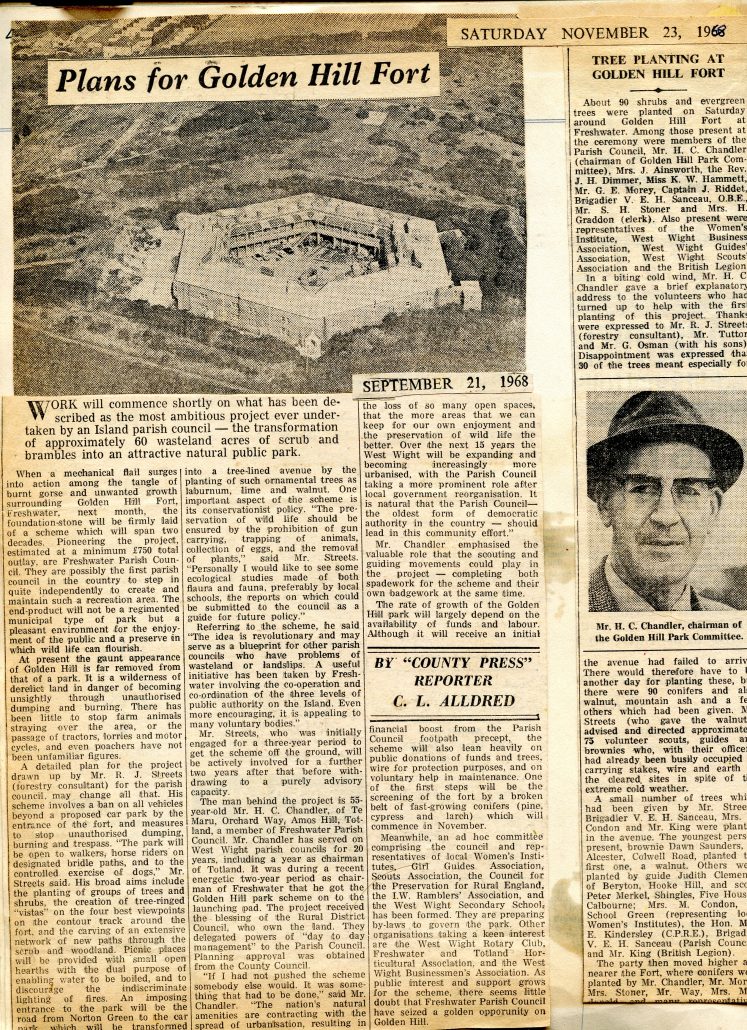 Freshwater Parish council had been involved in the future of Golden Hill for many years and in 1968 it was discussed at the annual parish meeting. They asked a qualified forestry consultant to prepare an initial plan for the conversion of the area into a public parkland. The proposal for a long-term scheme, taking several years to complete, was adopted and voluntary contributions were started by the donation of 1 guinea by Mrs Isa MacDonald of Rockstone cottage, Colwell Chine.

By September 1968 it was reported that 60 wasteland acres of scrub and brambles were being transformed into a public park. The land was “a wilderness of derelict land with evidence of unauthorised dumping and burning, poachers, motorbikes, tractors and lorry activity”. The plan for the public park included a ban on all vehicles, a car park, planting of groups of trees, including a screening planting around the Fort with a belt of fast-growing conifers, ringed vistas, an imposing entrance from Norton Green down and tree lined avenue with laburnum, limes and walnut trees and an extensive network of paths. 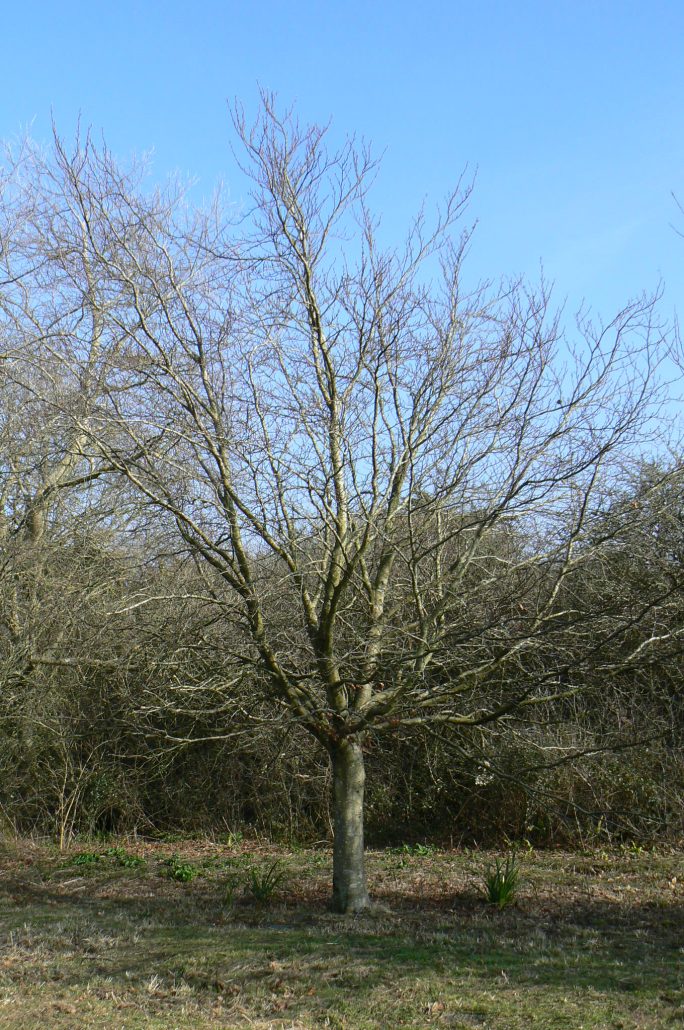 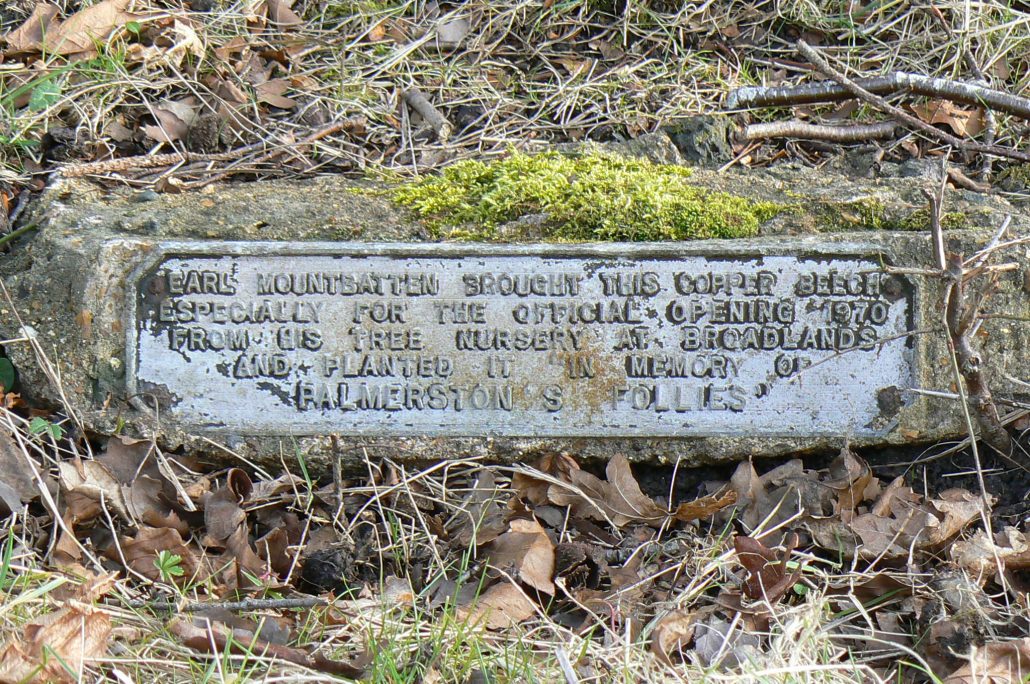 The man leading the public park project was Mr Harry C Chandler who had been Chairman of Freshwater Parish Council when the park plan was started and who is the grandfather of one of our Volunteers, Caroline Dudley. For several years he had a grocery and greengrocer’s shop in Moa Place, Freshwater. Mr Chandler chaired the Golden Hill Park Committee and outlined the plans for the park and asked for public donations of funds, trees, wire and volunteer help with the maintenance. The Committee included many local organisations including Freshwater Parish Council, Freshwater Women’s Institute, the Girl Guides and Boy Scouts, the Campaign for the Protection of Rural England, the IW Ramblers, West Wight Secondary School, West Wight Rotary Club, Freshwater and Totland Agricultural Association and West Wight Business Association. This creation of the Golden Hill Country Park really was a superb effort from the local community.

On 7th June 1969, the Isle of Wight County Press showed a photograph of Mr Chandler inspecting one of the young birch trees planted along the avenue leading to the car park. 1970 was the European Year of Conservation and Earl Mountbatten of Burma, Governor of the Isle of Wight, performed the opening ceremony and the cairn was built in the car park. In 1973 a seat was donated to Golden Hill Country Park by the West Wight branch of the Royal Artillery Association as a tribute to the gunners who had worked at the Fort in the past. Tree planting was part of the AA ‘Plant A Tree’ scheme.

On 16th October 1977 the Isle of Wight County Press published a letter from the Chairman of Freshwater Parish Council appealing for financial and practical help to deal with the aftermath of a “raging gorse fire” which had swept through Golden Hill Park in August and “destroyed nearly half of the trees and shrubs and gorse, leaving large areas of blackened stumps and devastation”. The Council had decided to clear the burnt areas to create new vistas.