Welcome to Golden Hill Country Park extending to 20 hectares of mixed habitat public open space.  The park was created in 1970 following military use from 1863 to 1962. When in use as a fort the military kept the land around the building open and mostly free of trees to enable good visibility for defence. It is likely the land was grazed for many years enabling the development of a rich grassland flora. This is still evident today and can result in wildflower areas becoming quickly established once scrub cover is cleared.

Since the time of the military, a young woodland has developed known as a secondary woodland and is mixed with patches of scrub and criss-crossed with paths. Most of the trees are young but there are some older oak trees mostly near the boundaries of the park. A rough estimate of tree age gives an average of 76 years, beginning to grow around 1944. Lots of management in the countryside changed around this time. There is a large-ish oak at the Heathfield Road entrance next to a boundary stone so probably a boundary tree. This is about 150 yrs old so started growing around 1870 when the fort was being built. 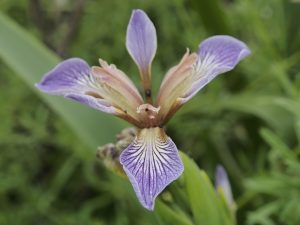 As a young woodland the range of woodland plants is still limited, having not had the time to colonise from surrounding areas but you can find typical woodland plants such as stinking iris, primrose and honeysuckle. Honeysuckle is the food plant of the white admiral butterfly being eaten by the caterpillar. White admirals can be seen on the woodland trails around late June to early August and would be considered a slightly unusual inhabitant as they are mostly associated with ancient woodland defined as at least 400 years old. You can also find cowslips along the sides of paths in the spring where the paths are managed for access and to allow more light to the woodland floor. 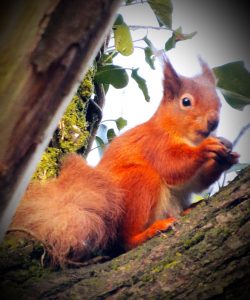 When walking in the woodland keep an eye out for red squirrels particularly between the car park and the Heathfield Road entrance.

Within the woodland you can find at least three ponds that tend to be seasonal so often dry up in the summer. Here you can see dragonflies and damselflies such as the broad-bodied chaser. Some years newts are seen and it is likely frogs and toads are also using the ponds from time to time.

Alongside the woodland, several areas of scrub have developed over the grassland with hawthorn, blackthorn, privet, elder and willow. You will also find brambles, dogwood, dog rose and gorse in and around these areas. Where the scrub is thick you can find nesting birds such as blackcap and white throat. These are generally shy birds so you normally have to be content to listen out for their singing or calls. Other frequently seen birds within the park are Jay, green woodpecker, magpie, buzzard and sparrow hawk. The scrub areas are criss-crossed by grassy paths which not only provide access but are also intended as fire breaks in case of summer fires. Annual management includes the pruning back of these areas to maintain the access and to prevent the scrub spreading over the grassland. Scrub may also be cut on a rotation to help it to rejuvenate and stimulate thick new growth, good for nesting birds. 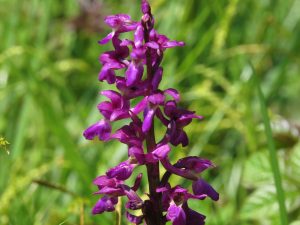 There are extensive areas of wildflower rich grassland within the park that are not only a haven for insects but also provide for fantastic views within and beyond the park. From some points you can get magnificent views of the Western Yar estuary, Afton Down, Yarmouth, the Solent, Totland and the mainland beyond. Within the park the soil chemistry varies from alkaline, through neutral to slightly acidic and partly due to this there is a wide variety of plant life. Orchids can be seen in several parts of the park from spring to summer starting with good displays of early purple in spring followed by southern marsh, plus the occasional pyramidal and bee orchid. 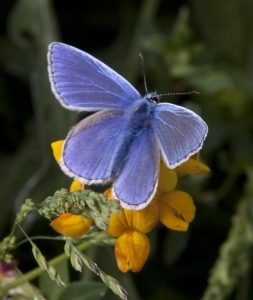 Within the grassland areas you are likely to see a variety of grassland butterflies in the summer months including marbled white, common blue, skippers, meadow brown and gatekeepers. As summer moves to autumn many fungi appear with a wide range having been recorded including orange milkcap, amethyst deceiver, fairy ring champignon and angel’s bonnet.

At the main entrance to the park opposite the car park, Gift to Nature planted a community orchard in the winter of 2019/20 with traditional fruiting trees. There is a mixture of apples, pears and plums sourced and propagated locally. This area will retain the wildflower rich meadow underneath which will have a haycut with the cuttings being collected and removed in the autumn. This helps to reduce the fertility of the soil and prevent mulching both of which help to increase the competition between plants and in turn preserve and enhance the diversity.  It is likely the meadow will now enlarge with the removal and thinning of hawthorn providing increased light levels and opportunities for flowering plants. Orchards have long been known for their benefit for wildlife and as this area develops visitors to the park will also be able to pick a selection of fruit in the autumn.