This is an area of grassland which is rarely walked upon but very highly visible as the busy Newport to Sandown road goes right past it.

Working with our friends at the Green Gym we set about controlling the scrub to improve the amount of light reaching the site; re-planting some mahonia and protecting them from rabbit predation with a wire fence; and also fencing off other small areas to protect the chalk downland vegetation which it is hoped will regrow on the site. 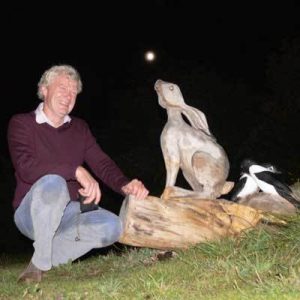 In addition, we commissioned the fantastic Hare from an old tree stump. The artist was Paul Sivell (seen with his creation by moonlight here).

The hare had a bit of a ‘holiday’  in 2009 when it was chainsawed off by a thief, but eventually found its way home and was reattached.

How to find it

North of Arreton on the Newport road, Arreton Cross is the wide grassy verge just opposite the turning to Downend. You might not really want to stop to explore the site as most of it is best seen from the road, but if you do want to pay a personal visit to the Hare you can do so.

By car or bike:

Stop at the layby just south of the site, and walk back. Postcode: PO30 3AA

The site is on the Bembridge Trail, between Arreton church and St George’s Down.