Dodnor Creek and Dickson’s Copse Local Nature Reserve (LNR) is a wetland and woodland site on the outskirts of Newport. The site was once part of the ancient deer forest of Parkhurst but development and agriculture has left the area isolated from the main woodland block.
The site has been modified by industrial use since at least the 18th Century and contains a number of heritage features. It is also extremely highly designated for its habitat value – including as a Site of Special Scientific Interest and as a Ramsar Site. See our site listing page for information on how to get to the reserve.

Dodnor Creek is a dammed stream. Formally known as Werrar Marshes, the marshes are particularly valuable ecologically for the natural transition from fen vegetation through marginal scrub to ancient woodland.

Two land drains feed water from the surrounding area. Parkhurst Stream (also known as Swallow Gutter) enters the reserve at the south-western of the woodland from the prison complex at Parkhurst. Another unnamed stream flows through the north-western arm of the wood. Both are small but water flow is present throughout the year. The open water at the west of the site is brackish due to the inundation of water from the Medina at high tides. This is reflected in the vegetation seen.

The creek is used as a secondary high water roost by wintering birds including teal and little grebe. Approximately 65% of the SSSI unit supports reed swamp, particularly on the western side of the viaduct, dominated by common reed with some bulrush and willow scrub. Sea club-rush also occurs in localised abundance particularly east of the viaduct. These habitats are considered to be suitable for supporting the assemblage of non-breeding birds, particularly including dunlin, gadwall, little grebe, shoveler, teal and wigeon.

The woodland is recognised as Ancient Woodland in the Isle of Wight Ancient Woodland Inventory. It is well-structured and species-rich, dominated by pedunculate oak with ash on the higher ground with a rich shrub layer composed of holly, hawthorn, spindle, privet, butcher’s-broom, hazel and field maple, and a rich groundflora including much bramble and several ancient woodland indicator species such as lords-and-ladies, red campion, wood spurge, common figwort, stinking iris, primrose and violets.

Alder with tussock sedge dominate along the brooks. The site also supports several ferns, rushes and sedge including polypody, broad buckler and hart’s-tongue fern, soft rush and pedunculate and woodland sedges, along with a rich lichen and bryophyte flora. The woodland grades into reed swamp with willow scrub along its southern boundary. The woodland has chalara (ash dieback) present.

The woodland has a reasonable size pond which is dominated by white water lilies (Nymphaea alba), with emergents along the southern edge including gypsywort, water mint and bur-marigold. It is used unofficially by fishermen.

And a bit of history…

Many local people still refer to Dodnor Creek as Chase’s Pond. We were thrilled when we were contacted by Richard Chase, grandson of Fred and Norah, who used to live at Dodnor, and who told us why it was known as Chase’s Pond, as well as supplying us with oodles of photos.

In 1935 they moved the 2, Dodnor Cottages, Dodnor Lane which was located across the Causeway (known locally as The Bank) adjacent to a large pond, which become known as “Chase’s Pond”. This pond was very popular with local fisherman, as it was well stocked with Carp and other freshwater fish. In the 1940’s The Medina Freshwater Angling Association was formed and its meeting room was in the Chase’s house, with Mr and Mrs Chase selling drinks and crisps to anglers both young and old. Annual cups and trophies were awarded and the family still have items of interest – Cups, Fish weighing scales and the hand bell which was kept at the front door. This photograph is of Fred and Norah plus fisherman of all ages circa 1948, believed to include the Mayor of Newport. The club discontinued in the 1970’s mainly owing to Mr and Mrs Chase becoming elderly and the decline of fish stocks. 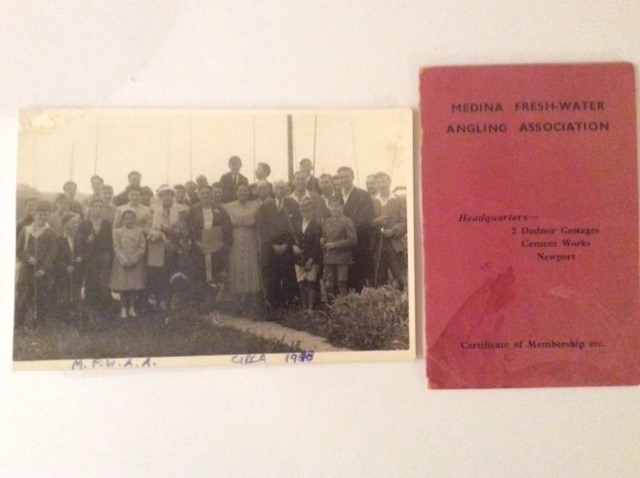 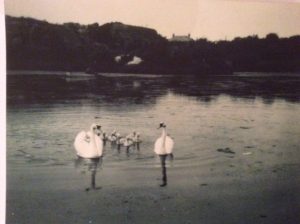 The upper reaches of the pond (beyond the railway viaduct) were always full of reeds, but the main pond was open water. During a great storm in the late 1950’s a flood occurred, resulting in a huge amount of reeds being embedded in the main pond, but fortunately this made fishing easier around the edges. Dodnor Cottages were also flooded

The pond suffered during high spring tides when saltwater flowed over the Bank from the River Medina, which during more recent years contaminated the pond with silt and inhibited fish growth. However, the bird life flourishes with Swan, Duck, Coot, Moorhen and Heron breeds most evident.

The River Medina was also an attraction for sea water fishing from the Bank and using small boats, often stored in the Chase’s garden. Commercially, an elderly man named Len Sheaf would set nets across the river and catch good quantities of Plaice and Flounders, which he sold from his fruit and vegetable van in Newport and surrounding areas. 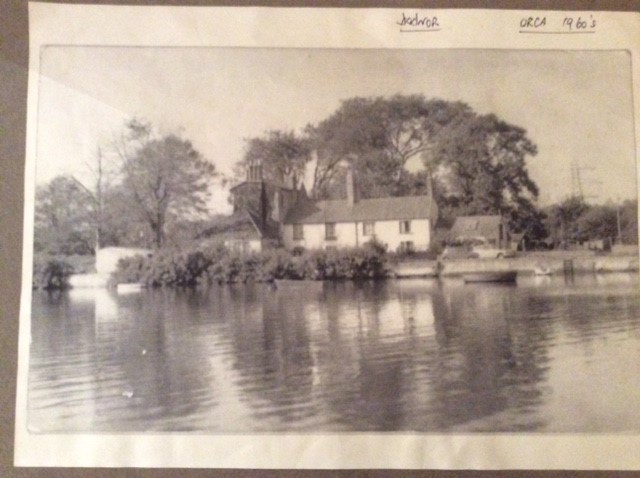