The Troll Trail was created in 2007 along a section of National Cycle Network route 23. It has since been absorbed into the Red Squirrel Trail but lots of the improvements we made along the trail are still there for you – and the local wildlife – to benefit from.

Gift to Nature has added local art, nature facts and sculptured seating along the route to show you some of the nature bits which we find fascinating but can often be missed as you whiz along. You can take advantage of the footpaths and bridleways leading off the cycle track and venture up onto St Georges Down or explore the field networks to the south.

This project is full of bridges, and we all know that Trolls live under bridges, you’re sure to see at least one! What many people don’t know is that the grey wagtail is rather partial to nesting under bridges too, so we have installed special nesting boxes for them under some of the bridges that the path crosses. There is also a special ‘terrace’ of House Sparrow boxes in place at Blackwater to help this sadly declining species. The wildlife meadow at Merstone Station, with new wildflowers and hand-carved picnic benches alongside a chalk and turf maze, is an ideal place for a picnic or just a quick pit-stop to catch your breath while admiring the rural views. The Troll Trail forms part of National Cycle Network route 23.

Improvements for wildlife include: grey wagtail nest box installations under bridges and a house sparrow palace to help this much-declined species. The work at Merstone station was substantial, reorganizing the management of a large public space in order to allow meadow habitats to develop. Through wildflower seeding and specialist management we have added essential nectar and pollen sources. Hedgerow planting (including disease-resistant elms) has helped improve wildlife corridors. The work of G2N has prompted additional assistance from the Isle of Wight Council including the planting of a new orchard at Merstone. 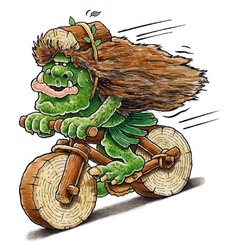 Improvements for people include: commissioning a unique set of picnic benches at Merstone Station and Three Bridges near Blackwater. At the midpoint of the trail we have secured access to the flourishing Birchmore Pond, which has been incorporated into the trail as a result of our work with the landowner. At Merstone Station we have created a commemorative unicursal chalk maze. Along the route we have commissioned a number of art sculptures by local artists.

What can you see?
Birds
The grey wagtail can be spotted on the Troll Trail, it wags its tail as it’s walking along which helps it catch insects. Grey wagtails have a quiet trilling song, a high ‘tzi-tzi’. The bird has slate grey upper parts and distinctive lemon yellow under-tail. Categorised as being of National Conservation Concern by the Biodiversity Action Plan (BAP) and scarce locally, this heightens the importance of offering extra breeding opportunities to the mating pairs on the Island. Grey wagtails usually nest near shallow, fast-flowing streams; they build their nests in hollows and they are known to take very kindly to having a hollow provided like the boxes we are installing under the bridges of the Troll Trail. You will be able to hear and see buzzards flying overhead; they are recognised by the BAP as being of National Conservation Concern but our local population is thriving and you are very likely to spot them now. You may also see the beautiful green woodpecker, either hunting for ants or going into holes. They rarely build their own holes, relying on finding existing ones. Green woodpeckers are easily recognized by their laughing ‘yaffle’ call and exotic plumage, with a green back and wings and a bright yellow rump. It has a bright red crown and black patches around the eyes. This bird is well known for its extra long tongue which it has to curl up in a spiral but is great for licking up insects from under bark. You will probably hear the long-tailed tit before you see it, making a very noisy and high ‘see see see’ and a trilled ‘tsirrup’. Hopefully you will see flocks of house sparrows but recent reports state that the house sparrow population has declined by 50% in the past ten years – the bird is not threatened globally but our populations are definitely struggling. This is why we felt it important to include nesting boxes specially designed for house sparrows in this project. Yellowhammers can be seen flying around the surrounding fields and in and out of hedges looking for weed seeds, wild fruits and insect larvae. The male is especially beautiful, with a bright yellow belly and head. Their most distinctive feature is their call which some report sounds like “A-little-bit-of-bread-but-no-cheese”. Yellowhammers are a Nationally Scarce species partly due to their reliance on hedgerows for a large proportion of their food. This highlights the importance of these countryside features and reinforces the need for events such as the Annual Isle of Wight Hedgelaying Competition.
Plants
Flowers you can spot along the Troll Trail include the scarlet pimpernel; this pretty flower is normally pink, but is occasionally white or blue, best found on sunny days because if it isn’t light enough their petals curl up. Common knapweed can be found around the platform, its striking purple flowers being much-loved by butterflies. Look for traveller’s-joy (also known as old man’s beard) in the hedgerows, a wild relative of cultivated clematis – the flowers are almond-scented and loved by bees and birds. In the hedges you will find hazel, a great tree for our rare population of red squirrels, who love the hazel nut. You can also see hawthorn whose berries are a vital source of food for wildlife. You can spot the wild teasel in the meadow; it has been and is still being used to raise the nap of fabrics such as wool. In the wetter areas along the margins of the river you can see and smell meadowsweet, this plant has a long history of medicinal uses, its flowers are a source of aspirin. St John’s wort can be spotted in open sunny areas, it is well-used medicinally to guard against depression. Between May and July you can see the beautiful yellow flag iris flowering in wet areas, particularly at Birchmore Pond in the middle of the route. Also between May and July you can spot the bell-shaped mauve or white flowers of comfrey, a plant also known as knit-bone because of its ability to help mend fractures and breaks. Along the Troll Trail you will spot young English elms. Dutch Elm Disease means that as soon as the tree reaches a certain age, the beetle carrying the disease moves in and kills the tree. The remnants still in the ground sprout and the whole process begins again. We at Island 2000 have fought to stop the spread of the disease but it was too voracious. Now to preserve this habitat type we buy hundreds of disease resistant elms each year and are working to replenish the lost trees. These resistant elms are being planted in the hedgerows of the Troll Trail.
Butterflies and Dragonflies
You can see hawker dragonflies between July and November feeding on insects, especially in wet areas in the afternoon and evening. You may also spot the broad-bodied chaser between May and August near still water, this dragonfly is carniverous and males can be identified by their pale blue abdomen. The large white butterfly (one of the Cabbage whites) can be spotted between March and October; it varies in colour from cream to pale green with dark spots and can grow a wingspan of up to 7cm. The handsome speckled wood butterfly can be seen between February and October near the hedgerows and the scattered pieces of woodland. Instead of flowers it feeds on the honeydew secreted by aphids. You can also look for the gatekeeper butterfly between July and September feeding off flowers in the meadow.
Art
Throughout the route we have installed many pieces of art, even the seating has carvings of the types of animals and plants that you will see while resting your weary feet. Keep watching as you go, see what beautiful things might be revealed when you stop and take a second look!