Prior to 1850 this stretch of land was just a boggy area on the floodplain of the meandering River Yar but within 15 years it became a hive of industrial activity as the demands of the growing Victorian population took hold.

Originally Sandown Community Orchard was part of the cottage gardens for those employed at the nearby waterworks. The first waterworks were built in 1861, Sandown was evolving as a town and a water supply to each house was beginning to be a problem. Wells were not always able to keep up demand.

A group of local gentleman decided to create a water supply from a central source and pipe it to every road in the town. An Act of Parliament was obtained to set up the Isle of Wight Waterworks Company, distributing water from the River Yar. An underground source was also tapped into. Known as Dyers Spring the water was collected in a pipeline running all the way from Winford to the waterworks where it was mixed with water abstracted from the Yar. The ‘treatment’ was a form of settlement in open lagoons and any suspended material sank to the bottom. Once the ‘treatment’ was completed the water had to be pumped up into the town.

Everything in those early days was driven by steam. In the picture the chimney, which was a necessary part of the system, rises above the strongly built brick buildings.

The village of Brading was also supplied from Sandown waterworks. A reservoir was constructed on Brading Down which received water, pumped from Sandown, and distributed into the houses. There was a pipeline to the top of Lake Hill too and an open reservoir was located behind the Barracks, now the site of The Heights.

After a medical scare in 1920 when many people suffered from gastro-intestinal illness chlorination was installed in Sandown. It was one of the first places in the country to do this. The outbreak had been very serious and a Dr Jubb was sent from London to investigate and report. Many thanks to Paul Bingham for investigating this for us.

Sandown grew into a holiday destination which attracted many visitors throughout the summer months. The Sandown Urban District Council bought the waterworks in 1928. A modern gravity filtration unit was commissioned in 1932. Gradually the energy source for all the activities in the waterworks changed and electricity took over from steam or gas oil pumps. In turn the Isle of Wight Water Board started to run the water supply system across the Island in 1951. At this stage Sandown started to supply the east side of Ryde, Seaview and St Helens through new trunk mains.

A new intake was constructed at Alverstone but the treatment continued to be carried out in the old settlement tanks. This situation continued until 1980 when Southern Water undertook more alterations. The old buildings were demolished and a new 18Ml/d (4 million gallons a day) plant was commissioned. New high lift pumps deliver water to not only Brading Down but also to a reservoir near Wroxall which serves Shanklin and acts as a back up to the Ventnor source. A ring main of pipelines now runs as far as Bembridge with a link to Ashey reservoir too. More alterations have been carried out to the works since 2000. We have Fred Caws, an retired employee of Southern Water and its predecessors to thank for all this information. 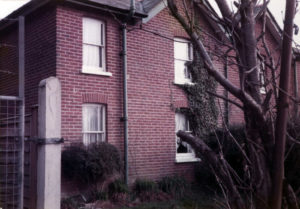 But what of the employees who lived and worked at Sandown? There were a pair of cottages. The last person to live in the waterworks cottage and tend the orchard was Harold ‘Sandy’ Thomas. Sandy’s family have worked with us to restore this orchard and have shared their memories of the cottage and its garden. Sandy worked there from the 1930’s as an engine driver. In 1954 he became a Superintendent which meant he had to live on site. The waterworks cottage was incredibly basic, a widower Charlie Willis had lived there before. Frank Row lived in the other cottage and his garden was within the curtilage of the current waterworks. The cottages were demolished in 1981.

Sandy tended the orchard and also had a vegetable garden at the northern end.

There are a variety of apples, cherries and plums growing in the Orchard, including the ‘Alverstone Apple’ and ‘Adgestone Blue’ plum.  Feel free to pick the fruit in the autumn or just enjoy the tranquillity at any time of the year. The orchard provides a great nectar and food source for insects and wildlife. You might well be lucky enough to spot a squirrel or a tree creeper and long-tailed tits are regular visitors.

We have been cutting the hedges shorter and removing some of the scrub and sycamore to let more light in. This will enable the fruit trees to thrive and encourage the ground flora. Look out for the carpet of primroses in the Spring. 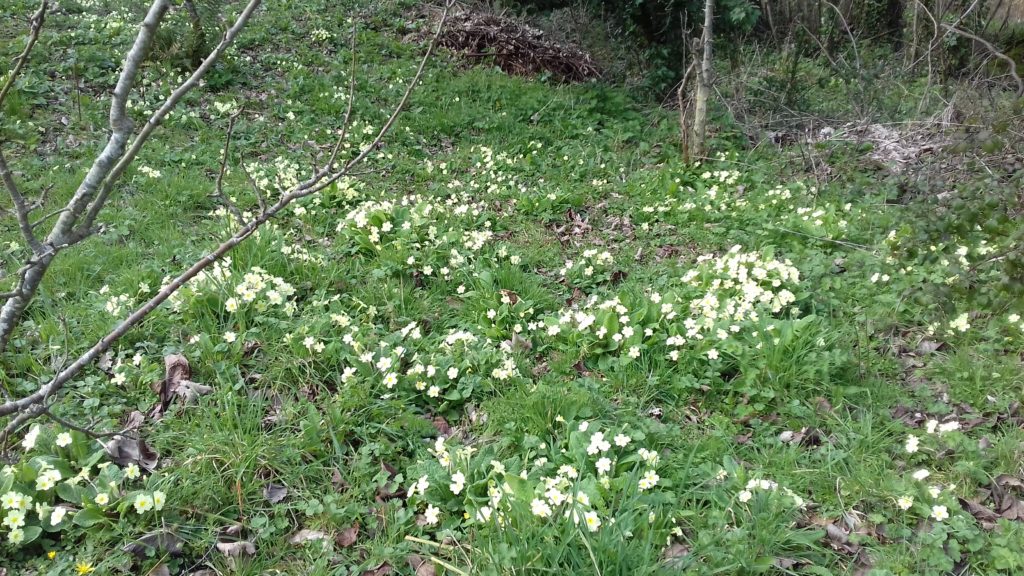 The pond is natural and both the water course and pond are excellent for pond dipping – where you might find both greater and lesser water boatmen, diving beetles, water scorpions and three spined sticklebacks. In the summer months dragonflies and damselflies will delight with their colourful displays.  In 2017 I-Watch held a mini ‘bioblitz’ across the site and found an incredible 137 number of species. Click here to see the list.

The River Yar does not flow through our site, it is further west. The watercourses you see on our site are a small stream that flows in from Lake Common to the north and a drainage ditch that runs alongside the cycletrack and would have been created when the railway line was built.

The cycletrack follows the course of the old railway line. In 1875, after a couple of false starts, the Isle of Wight (Newport Junction) Railway opened the main part of its 10-mile Sandown to Newport line but poor connections and not enough passengers or freight meant the company closed by 1880. At this point, it was bought by the Cowes & Newport, Ryde & Newport railway (all one snappily-named company!) who were legally renamed as the Isle of Wight Central Railway. In 1923 Southern Railways took it over. It finally closed for good in 1956.

The building of the railway line greatly affected the River Yar, cutting off its meanders and has altered the landscape to this day. A long history of river deepening and dredging has damaged the river structure along much of its course leaving an incised channel through soft and eroding sandy soils.

We would like to thanks the following people who have helped us gather this information – Julia and Chris, who are Sandy’s children and Emma his grand-daughter, Fred Caws for all the help with the Water Works story, Dr Paul Bingham and Richard Smout.