Elm Identification: Click here for a handy guide from the lovely people at the Natural History Museum. 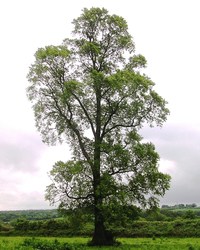 Elms were once the characteristic mature trees across much of the Island’s landscape but have been devastated over the past 40 years by Dutch elm disease (DED), a lethal fungal infection spread from tree to tree by bark beetles.

The loss of English and wych elms as large trees (they still survive in hedgerows) has not only changed the look of the countryside, it has also affected a wide variety of species that were dependent on them such as the scarce white-letter hairstreak butterfly.

Since the last big outbreak on the Island in the 1990’s Island 2000 Trust has distributed and planted, with the help of landowners and communities, thousands of disease resistant cultivars across the Island in an attempt to restock woods and copses and create a whole new generation of elms for the future.

History of the Elm Project
Since 1997 we have been working to counteract the impact of dutch elm disease on the Island’s landscape (particularly the AONB) and biodiversity (especially the elm-feeding butterfly the white letter hairstreak Satyrium w-album). 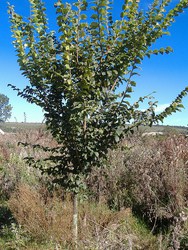 The initial sanitation programme attempted to fell and burn infected timber to slow and then halt the progress of infection; this was rendered impossible by frequent movements of infected logs through firewood sales. Instead Gift to Nature worked with British Butterfly Conservation and Southampton University to source resistant elms which could replace both the landscape feature of the lost trees and suitable habitat for elm-feeding invertebrates. The chosen tree, UlmusLUTECE was then imported from France at 1000 trees a year for three years and planted out on our sites, farms, school grounds, public parks, incorporated into Defra and Forestry Commission planting schemes and sold in small numbers to private individuals to contribute to the costs of the next order. We have continued to work with AONB and BBC to source new resistant varieties and this has led to an order for Sapporo Autumn Gold this winter. These trees are paid for through an agreement between Gift to Nature and Vestas Technology whereby a resistant elm is planted for every new employee taken on at their Island base. 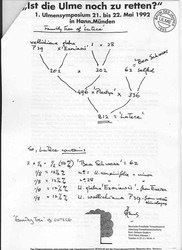 On the right is the plant breeder’s chart for LUTECE – a real Wych Elm that is totally resistant and supports a native elm fauna (top of our list being White-letter Hairstreak). There are elms out there sold and marketed as resistant but few really are, most are just unpalatable to the beetle that carries the disease and most of those are so alien to our native wildlife that they don’t do a lot except sit there. But LUTECE is brilliant; it’s been researched by British Butterfly Conservation specifically for WLH conservation and we’ve been planting out across the Isle of Wight. We’ve distributed over 3000 now and the earliest of the plantings are really beginning to show up in the landscape.