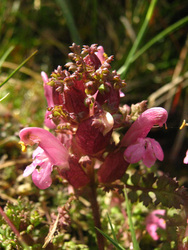 Bohemia Bog (a Site of Importance for Nature Conservation) is one of the most important botanical sites of the Island, reminiscent of a New Forest wetland and home to species found nowhere else here on the Island. It is a transition mire perched on a hillside near Godshill. Gift to Nature has worked here with the landowner, Environment Agency, wildlife trust and IW BAP partnership since 2002 and it is no exaggeration to say that this work has saved the site. The bog itself is tiny, originally 0.1 ha set in a paddock of 5 ha and was gradually disappearing under bramble and gorse scrub to the extent that grazing animals could no longer keep it in check and priority plant species were declining at an alarming rate.

We have cleared back overgrowth, set up fencing for grazing control, and begun to extend the bog by uncovering its margins. Gift to Nature arrange annual monitoring and occasional public walks. Gift to Nature will continue to manage the bog to preserve the fantastic wildlife while maximising the carbon storage potential. Better management of bogs is believed to help reduce greenhouse gas emissions. Bogs store carbon and prevent it entering the atmosphere as carbon dioxide. But they need to be managed well to increase the carbon storage potential and minimise emissions of methane. It seems that there is more carbon in British bogs than the forests of Britain and France together.

We have createsd about 0.5 ha of new bog by painstakingly clearing scrub from around and between the remaining patches of high quality bog embedded in amongst it all.

Pale Butterwort is the key plant at Bohemia as this is it’s only island station but in addition we are working to conserve the bryophyte community and we’ve been able to commission the first full survey of this group for nearly 10 yrs thanks to funding from the Environment Agency, this info and the management advice that comes with it will be invaluable in helping us to tweak and fine-tune management in the future. Round-leaved sundew and cotton grass are two other important bog species severely restricted on the island but doing well here and which both will we hope spread into the new areas created this winter.

We are also managing the site for its invertebrates and in particular for its hemiptera; a key species we found on the site is Paradelphacodes paludosa, notable wetland species and new to the Isle of Wight when discovered here.