The Royal Commission on the Defence of the United Kingdom (1859) was given the task of looking at the ‘state and efficiency of British land-based fortifications against naval attacks.’ The areas of specific consideration included Portsmouth, Spithead and the Isle of Wight. It recommended the building of a number of forts around the coast and Lord Palmerston, the Prime Minister pushed through the recommendations. The forts acquired the name of ‘Palmerston Follies’. 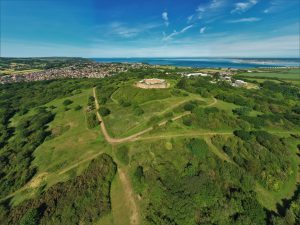 Golden Hill Fort was built on the high ground in Freshwater between 1863 and 1868, its purpose was to defend the River Yar and provide accommodation for soldiers serving in the local batteries of the West Wight. The cost of building the fort was £38,000. The work included erecting fencing along part of the boundary and ‘grubbing and clearing roots, stool moors etc. from land known as Golden Hill Plantation’ and by November 1863 ‘a great number of men’ were ‘employed in digging out the soil and levelling the ground’ for the fort. Eight kilns were situated on the common around Golden Hill Battery to produce the bricks needed 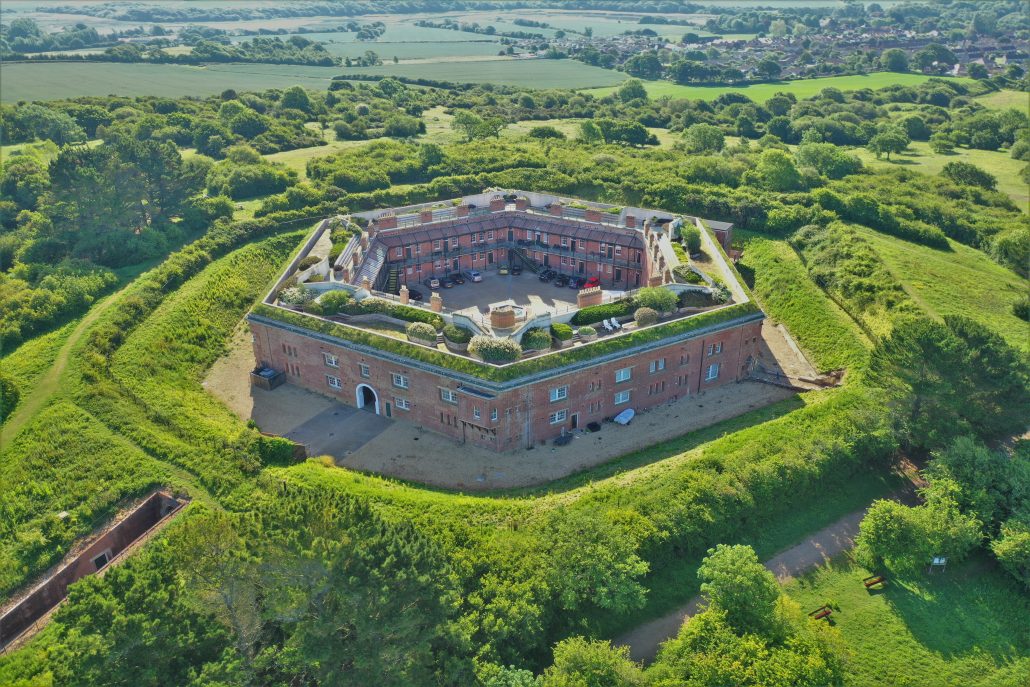 In 1869 a grand ball was held on the opening of the fort with ‘upwards of 150 invitations to the elite of the island’ by the officers. A few days later ‘the ball was renewed at the fort by non-commissioned officers and gunners of the different batteries in the division and their friends who thoroughly enjoyed themselves’.

The original design of the fort was a polygonal shape to accommodate 400 men, however this was considered to be too big and was reduced to 250 men. By the time the fort came to be built in 1863 the design had been reduced further to a smaller hexagonal fort to house 8 officers and 128 men. A hospital (for 14, later 21) was built within the fort. The entrance to the fort was via a sunken way and tunnel through the glacis. On the ground floor were Guardroom and Cells, Magazine, Tap Room, Canteen & Bar, Cook House, Barrack rooms, Hospital Kitchen, Sergeants rooms, Stores, Laundry, Married Soldiers Rooms, Officers’ and Officers’ servants rooms. On the upper floor were Barrack rooms, a reading room, a 21-bed hospital, Ablutions, Married Soldiers Rooms, Officers’ mess, Field Officer’s quarters and Officers’ rooms.

The fort was designed as a double storey brick casemated barracks surrounding an open courtyard. The roof was bomb-proofed by placing earth on it. Initially 18 light guns were planned but the fort was built on clay and spells of heavy rain caused some of the earthworks to fail, and in the end the roof gun positions had to be modified to just six positioned at the angles with a firing step between. The guns were 40-pounder breech-loaders, installed in the 1870s and removed around 1903. 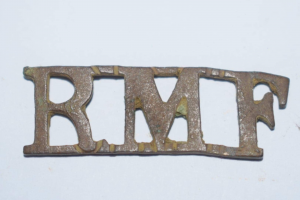 In 1869 the Royal Artillery were posted to the fort, providing two companies of coast gunners. During the late 1870s a skittle alley, workshop and fire engine house were built in the ditch outside the fort. In 1888 the fort was used as the Western District Artillery School and resulted in the expansion of these out-buildings to the north of the fort to include assorted workshops, stores, barracks, a drill hall, a new hospital and married quarters block. By 1912 the majority of the hospital buildings were converted into additional officers’ quarters

1914    The Fort continues as a training facility and as an infantry training depot for the Duke of Cornwall’s Light infantry. Over 30,000 troops trained here between 1915 and 1918. Infantry battalions and gunners continue to occupy the site after the First World War. 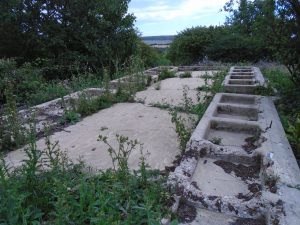 WW1 Washhouse where soldiers would have showered, which still survives within the Country Park

As well as continuing as the School of Gunnery, the First World War saw the fort being used for training infantry regiments, it is estimated that over 30,000 men of the Duke of Cornwall’s Light Infantry being trained between 1915 and 1918. Reports in the local newspapers state that in December 1914 the Inspecting Officer of camps moved the detachment of the 4th Battalion Royal Warwickshire camped on the slopes of Golden Hill (now the Country Park) to billets in public halls because of the flooded camping ground. It notes that the construction of long line of huts on south side of the hill is proceeding rapidly for the men. In January 1915 it reports that “The men of Kitchener’s Army billeted around Freshwater can now move into the huts around Golden Hill.” See The Story of Our Excavations to learn more about these buildings and  ‘The People’ for details of A. A. Milnes and Harry Patch’s stay here. 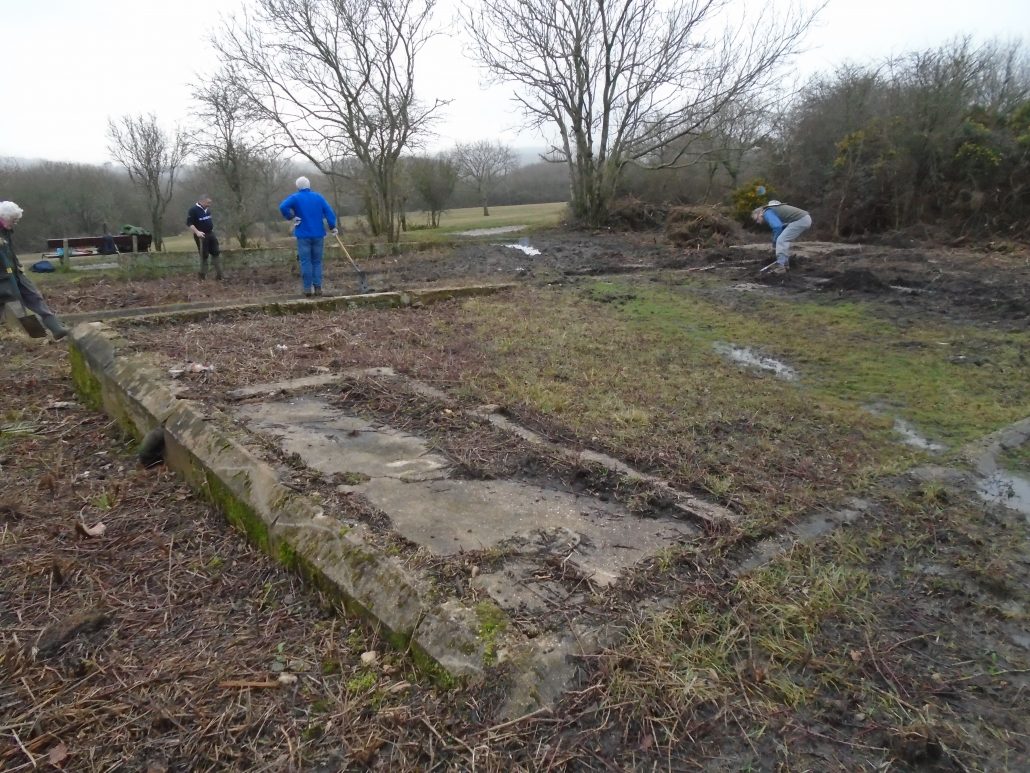 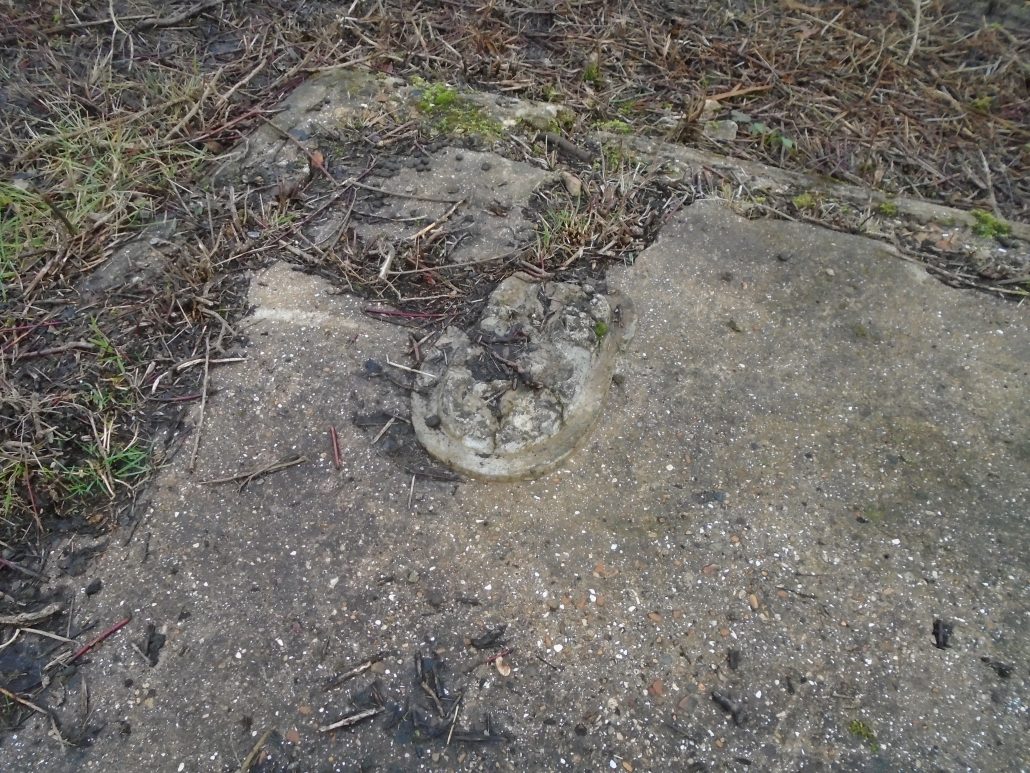 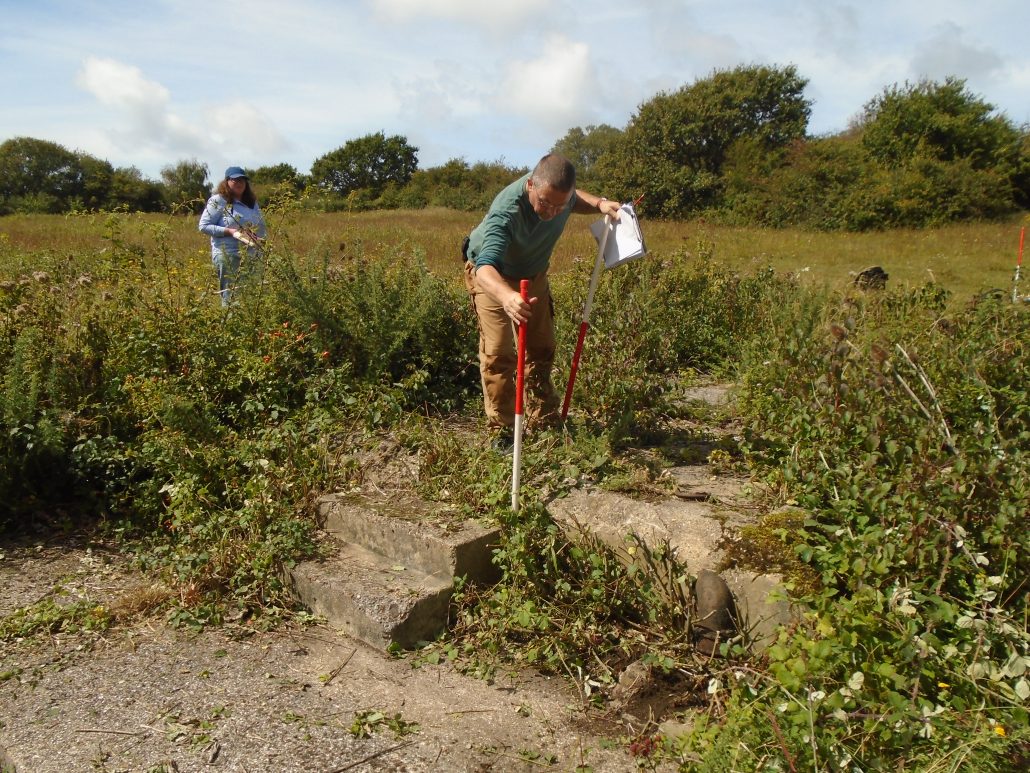 These steps lead down to what we believe was one of the 1st World War Mess Halls where the soldiers ate their meals.

Between 1920 and 1923 the Royal Irish Rifles were stationed at the fort. It was continually in use during the inter-war years including by the Royal Artillery. In 1926 the fort became a District Establishment, staff based at the fort maintained coastal batteries and Regular Army specialists trained the Territorial Army. From 1932 the headquarters of the Needles Fire Command were based at the fort.

During the Second World War the fort became the headquarters of the 530 Coast Regiment Royal Artillery (formerly the Isle of Wight Rifles, until 1937). Training continued with the gunners of the Territorial Army of the Hampshire Heavy Regiment. In 1940 when the threat of German invasion was at its height, the 50th Holding Battalion and the 11th Battalion of the Royal Hampshire Regiment were based at the fort. It is believed that the fort was used for training Canadian soldiers when these units left.

From 1945 to 1962 the fort was used as a barracks for the Royal Army Service Corps (RASC) Water Transport Training Company and training their Junior Non-Commissioned Officers (NCOs).

In 1962 the RASC left the fort and in 1964 the Army sold the fort bringing its military connection to an end.

From 1969 to 1984 a number of light industries were based there. Restoration of the interior of the fort began in 1984 and it opened as a tourist attraction, including a cafe and a museum, in 1985. However, this was short lived, eventually folding and the fort was left derelict. During this time a number of illegal rave parties were held there. In 2002 the fort was put on the market for £800,000. It was purchased in 2005 and converted into 18 individual apartments. The interior of the fort is a closed gated community. A few commercial businesses still remain in the buildings to the north of the fort.

Originally 21 boundary stones were set out to define the Golden HIll Fort land, but our volunteers were only able to find and record 7 of them, all of which had “WD” the number and an arrow chiselled into them. Some are now outside of park which shows just how large the original area of the Golden Hill military land was. Here is boundary stone number 18 which sits on the road to Norton Green”

St Andrew’s Church lies 600m to the north of Golden Hill Fort. The land on which it lies was given to the Canon Isaacson by Miss Elizabeth Hamond in 1875 for the purpose of building a church. The project was funded by local residents and work on the first building was started in 1903. This was designed to initially be a school for the infants of Norton Green but to later become the chancel of a new church. It was used as a school for a short time.

The Church was attended by the soldiers of the garrisons at Golden Hill Fort. Many of the church services and parades of the garrison troops were held at this church as well as at All Saint’s Church.

This information has been provided by our volunteer Frances Cook. For the full referenced article which includes a timeline, troop movements,social events and crimes and accidents please read link to Social History report Vol 1.