The old and the new

The quarry that is our Blackgang Viewpoint site is not old at all, neither is the road you arrive on, but the immediate area was the site of ancient human activity.

In the 1920’s two round barrows were excavated close to this site. One contained a complete skeleton of a man aged around 35. Fragments of animal bones indicated a diet of ox, pig and sheep, but there were also limpet and winkle shells suggesting seafood may also have been eaten. This barrow was dated to the early Bronze Age. A second barrow contained a cremation urn and was dated to the Middle Bronze Age.

Chale Golf Course was founded in 1905 and continued until the Second World War. Situated on St Catherine’s Down, it had 9 holes and was open all year. Part of it may well have been on what is now the Gift to Nature site. There are some interesting photos HERE.

The old Undercliff road was in place by the 1840s, and served as the main road between Niton and Chale. The road was considered one of the most picturesque on the Island, but inherent in its beauty was its danger. The Country Council closed the road after a massive rockfall from the face of Gore Cliff in July 1928 and a few days later the whole coastal slope, which was saturated with water failed and slipped towards the sea.

Quite a lot of time had been spent looking at the possibility of re-opening the old road, before that idea was finally abandoned. The owners of the land through which it ran – the Windcliff estate were not prepared to reinstate it unless a Downs road failed to meet the needs of the public, and so negotiations took place between the County Council and Mr Cheek and Mr Collins for the purchase of the requisite land on the Down.

There seems to have been some unhappiness over the amount of time taken to make progress on a new road and it was only on the 1st July 1930 that the Highways Committee gave instructions for the preparation of plans, specifications and estimates for the construction of a new road over the Downs on the line of the bridle road from Niton to Chale at an estimated cost of between £30,000 and £40,000 and for the reconstruction of the old road at an estimated cost of about £7,000. The Ministry of Transport was told that it was hoped to commence work not later than the following February, and that the work would take about 12 months to complete. However there was some debate with the Ministry about gradients, and delays in getting the necessary permissions. The engineers were Messrs H Humphrey and Sons. Messrs Terry and Co were contractors.

During the cutting of the road in 1931/2 two Bronze Age hut platforms and pottery were recorded. The first near a spring would have had a constant source of water. These were dated to the Late Bronze Age and show that there was a settlement of considerable extent on Gore Down during the Bronze Age.

The new road appears to have been opened by Whitsun 1933. 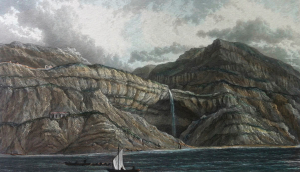 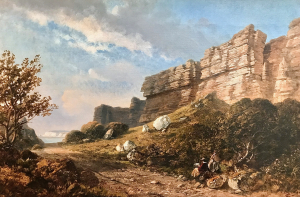 Today when you look out from Blackgang Viewpoint there is very little shipping to be seen, except the occasional tanker, bulk carrier or ferry all way offshore. But in centuries past, this wasn’t the case. The coastal waters were really busy and inevitably there were many wrecks. 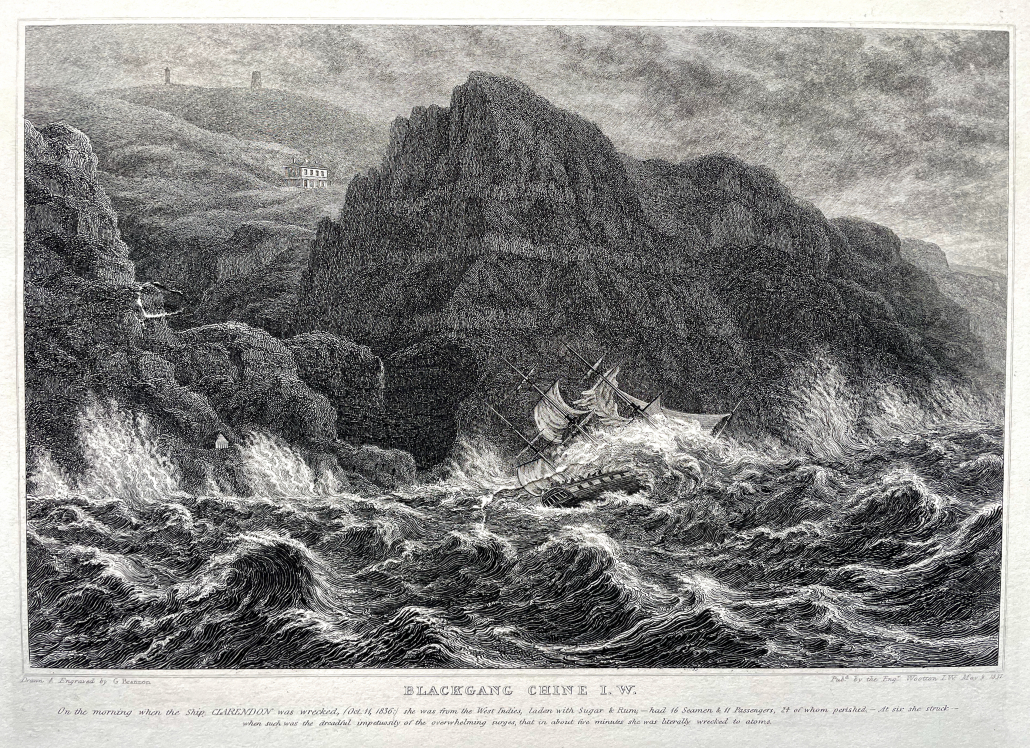 The tall medieval octagonal tower on the opposite side of the road from Blackgang Viewpoint is all that survives of an oratory built or enhanced in 1328 as penance by Walter De Godeton who stole holy wine destined for the Pope and was going to be excommunicated unless he provided a lighthouse and monk to tend the lamp.

A priest would tend the light to guide ships and say prayers for the souls of the drowned – at the landowner’s expense. It fell into disrepair in the 16th century after the dissolution of the monasteries and was abandoned.

In 1785, a lighthouse was started but never completed because the Hill is so often shrouded in mist. Known as the ‘Salt Pot’, its round stone base can be seen by the large aerials near the Oratory.

The most famous wreck is that of The Clarendon, at Blackgang in 1836. She was sailing from St Kitts with a cargo of sugar, molasses & rum, carrying 11 passengers and 17 crew. In a howling gale and huge seas, she hit the beach broadside, rolling over on her side. She broke up in less than ten minutes and only 3 people survived.

There are many stories of heroism on the south-west coast of the Isle of Wight in the 19th century, of lifeboat crews who put to sea in open boats, in atrocious weather conditions, attempting to rescue ship-wrecked people in peril from huge seas and pounding waves, and some of the brave lifeboat crews lost their lives. There were stations at Brook, Brighstone Grange and Atherfield and on a clear day you might spot some of the coastguard cottages from Blackgang Viewpoint.